‘Birth is the brightline event, you fall one side or the other,’ argues State in opening appeal 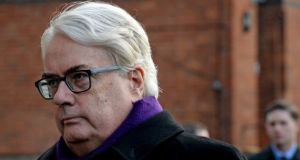 There is a “seminal” difference between a child and an unborn, the Supreme Court has heard.

Mary O’Toole SC, for the State, argued that voters did not intend when approving the Children’s Referendum in 2012, that the word “child” would include the unborn.

She said birth is the “brightline” event marking when the unborn is entitled to the full extent of constitutional rights available to citizens.

Ms O’Toole was opening, before a seven judge Supreme Court on Wednesday, the State’s appeal over findings by the High Court’s Mr Justice Richard Humphreys that the unborn has constitutional rights beyond the right to life in Article 40.3.3.

The judge held the unborn is a “child” within the meaning of Article 42A, with constitutional rights the State is required to protect and vindicate. Article 42A, inserted as a result of the Children’s Referendum, affirms State recognition for the “natural and imprescriptible” rights of “all children” and provides the State “shall, as far as practicable by its laws, protect and vindicate those rights”.

In the case, the State’s position is that, before birth, the unborn has no constitutional rights beyond the right to life in Article 40.3.3, the Eighth Amendment, giving the unborn an equal right to life with its mother, she said.

It argues that if the High Court finding that an unborn has rights similar to an Irish citizen child is upheld, that would bring about a “radical” change in the understanding of law and practice.

Ms O’Toole said the relationship between mother and unborn is an “absolutely unique phenomenon” in human life as they are so inextricably bound up with each other rights cannot easily be balanced.

She asked if, for example, the State had to vindicate a right of the unborn to welfare, how was that to be balanced with the mother’s even where the mother was doing nothing unlawful? Would the government, for example, have to insist all women of childbearing age take folic acid?

The appeal follows findings made in the case of a Nigerian man who came to Ireland in 2007, his Irish partner and their child, born in August 2015. The man, who was refused asylum and subsidiary protection and against whom a deportation order issued in 2008, is alleged to have begun his relationship with the Irish woman in September 2014. The couple initiated proceedings in May 2015 aimed at preventing his deportation and seeking residency on the basis of potential parentage of an Irish born child.

The appeal raises issues about the extent of the constitutional rights of the unborn, whether the State must consider any such rights in the context of an application to revoke a deportation order by a prospective parent of an Irish citizen child and the rights of unmarried parents.

Ms O’Toole said, while various judges had made observations in a number of cases before the Eighth Amendment in 1983, there was no “definitive” judicial statement about the right to life of the unborn before 1983, “let alone any definitive statements” about other constitutional rights.

The judicial commentary around 1983 related to abortion and it was difficult to see that other rights of the unborn were considered. The whole point of coining the term “unborn” was so it would not be qualifiied by the use of words like person, child or citizen because that would raise the issue at what point an unborn is a “person”, “child” or “citizen”.

The court could not be put in position of deciding that as it was a policy issue for the legislature and not justiciable because there is no consensus when those things happen.

In the day before birth, the only right of the unborn, according to the Constitution, is the right to life, the right to be born, she said.

When Mr Justice Donal O’Donnell asked how that equated with the State’s position in an earlier case over human embryos, counsel said the issue was that the people, in enacting the Eighth Amendment, had identified the unborn as the rights holder and had distinguished unborn life from persons, citizens and children.