Woman who slipped in bar ‘caused own accident’, court hears 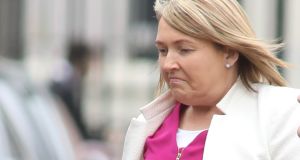 Martina Minnock, with an address in Tullamore, Co Offaly, pictured at the Four Courts on Thursday. Photograph: Collins Courts

A publican has told the High Court a woman who fractured her ankle when she claims she slipped on the floor of his bar caused her own accident.

Publican Andrew Johnston said the floor of his pub, The Beehive, Mountbolus, near Tullamore, Co Offaly, was not wet as alleged by Martina Minnock. He said she lifted a man and they both fell over during a 40th birthday party in the pub.

“I went back over the CCTV and saw it clearly with my own eyes,” he told Mr Justice Michael Moriarty.

He no longer had the CCTV footage because he could not retain it beyond a certain time and only received a request for it from the Minnock side about 12 or 14 weeks after the alleged incident, he said.

Had he got the request in time, he would not be in court, he said. “I did not feel her actions were my responsibility. It was nothing on my shoulder. It was not down to me.”

In evidence, John Cody, Ms Minnock’s brother-in-law, said she grabbed him around the waist from behind and lifted him up.

Mr Cody, who is 6ft and weighs 11 stone, said he was “surprised” and thought Ms Minnock might have wanted to get him out on the floor.

“She wrapped her arm around my waist. She tried to lift me up when I went up, my two feet were up and I fell down on top of her. We ended up on the ground,” he said.

Cross examined by John Paul Shortt SC, for Ms Minnock, he said he had been subpoenaed to appear in court on the pub side.

When counsel put to him it would have been “ridiculous” for Ms Minnock to go to lift him for an unknown reason, Mr Cody replied: “That is what she done.”

Ms Minnock, Arden View, Tullamore, has sued pub owners Andrew Johnston and Sian Marie Johnston as a result of the alleged fall on February 11th, 2012 while she was attending a the birthday party for John Cody.

She has claimed the floor was permitted to be wet and slippy.

The pub denies liability, denies the floor was wet and claims Ms Minnock had attempted to lift Mr Cody and as a result fell and she did not slip as alleged.

It claims Ms Minnock was engaged in dangerous and boisterous behaviour with another patron when she fell, wilfully and recklessly engaged in behaviour that carried a risk of falling and had no or inadequate regard for her own safety.

Also on Thursday, Bridget Mooney, who met Ms Minnock in hospital where she was receiving treatment for her injured ankle, told the court Ms Minnock told her: “You know me when I have a few drinks, I got really brave and I went to lift Cody, the long hoor and I fell.”

Asked by the judge if the alleged incident was “headline news” in the village, Ms Mooney said it was “very sad”.

Mr Justice Moriarty will give judgment on the case on Friday.