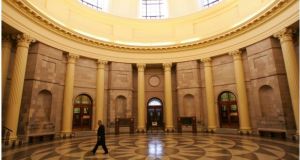 In his Supreme Court judgment on Monday, Mr Justice O’Donnell said Kevin Tracey was entitled to have a separate hearing, the possibility of getting legal assistance and, if appropriate, legal aid before any possible punishment for contempt. Photograph: Bryan O’Brien

A five judge Supreme Court has unanimously granted a man’s appeal over being jailed for a week for contempt by a District Court judge.

The judgments of Mr Justice Donal O’Donnell and Mr Justice William McKechnie in the successful appeal by Kevin Tracey, and an unsuccessful separate appeal by another man, clarify issues concerning how the courts should approach contempt and disruptive behaviour.

The Irish Human Rights and Equality Commission had submitted the finding of contempt against Mr Tracey, who represented himself, breached his rights.

Mr Tracey was jailed arising from comments he made when his case, involving a charge of driving without due care and attention, was mentioned before the District Court on May 31st 2006 for the purpose of fixing a hearing date.

Mr Tracey made comments including “how crooked? And you think you will get away with this? How crooked you are” which, he claimed, were directed to a garda after the District judge refused to allow Mr Tracey read a statement to the court.

As a result of the comments, the District judge directed Mr Tracey be brought back before him and jailed him for contempt.

In his Supreme Court judgment on Monday, Mr Justice O’Donnell noted Mr Tracey believes he has been subject of “victimisation” by the legal system, dating back to a civil dispute he had with a neighbour who is a judge.

In this particular case, Mr Tracey had no right to demand to make a statement to the District Court, no right to persist in attempting to do so and no right to make allegations against the gardaí, “if they were indeed the object of his comments”, on the occasion in question.

However, when the District judge ordered Mr Tracey be brought back before him, the situation changed since it was now possible punishment could be imposed, he said.

That meant “more elaborate” procedures were called for. Mr Tracey was entitled to have a separate hearing, the possibility of getting legal assistance and, if appropriate, legal aid, and should be told of his entitlements in that regard.

Given the importance of fair procedures and the constitutional value of personal liberty, the committal order would be quashed, he ruled. His judgment was endorsed by three other judges.

In a separate judgment, Mr Justice McKechnie expressed “grave reservations” about the bona fides of Mr Tracey at the District Court. However, because he could not be sure the “appropriate” level of fair procedures were afforded, he “most reluctantly” would also allow the appeal.

When Mr Tracey then raised the issue of damages, he was told those would have to be sought in separate proceedings.

The court dismissed a separate appeal raising similar issues brought by David Walsh arising from a hearing at Waterford Circuit Court on May 31st 2016 which, among a list of cases, dealt with possession proceedings concerning his sister Feana.

Due to Mr Walsh’s behaviour and constant interruptions, an order was made to jail him for two weeks for contempt. He was freed two days later by the High Court. After the Court of Appeal in March 2017 reversed that High Court ruling, the Supreme Court agreed to hear a further appeal.

Mr Justice O’Donnell said every court that had addressed this matter had concluded the “utterly unacceptable” conduct amounted to contempt.

For reasons including, when the question of imprisonment was raised, Mr Walsh was told of his entitlement to legal aid and given “ample opportunity” to address the issue, fair procedures were complied with and no injustice was done to Mr Walsh, ruled.

Having expressed hope the matter could be resolved without Mr Walsh spending any further time in prison, the court said it will hear submissions at a later date as to the form of order to be made.