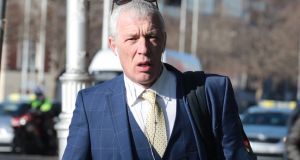 The owners of a “broken down” stallion that was sent for slaughter — but later entered in a race — are embarrassed because they sent a perfectly good animal to be put down, it has been claimed before the High Court.

Thistle Bloodstock, whose beneficial owner is Dubai-based Jim Long, should not be given a continued injunction to prevent the horse, Tartan Spartan, being entered into races, horse trainer Philip Fenton and horse dealer Jim Derwin claim.

The case returned to court on Thursday when Thistle Bloodstock sought to continue the injunction until the legal title to the horse has been determined. Mr Fenton and Mr Derwin oppose the continuation of the injunction.

Mr Justice Senan Allen said he hoped to give his ruling on Friday.

Stephen Lanigan-O’Keeffe SC, for Thistle Bloodstock, said the six-year-old stallion broke down last year and was sent to Mr Derwin, solely for the purpose of having the horse put down.

It was not sent for re-sale and the horsebox driver and Mr Derwin were supposed to get some €300 to €500 from a knackery depending on whether the stallion’s meat could be used for pet food, counsel said.

However, counsel said, Mr Derwin “in a rather strange transaction” sold the horse on to Mr Fenton, who said he purchased it in good faith for €2,000.

Thistle seeks the return of the horse but in the meantime is satisfied it is being well looked after by Mr Fenton, counsel said. As it has now been gelded, Thistle Bloodstock was prepared to give the horse a home for the rest of its life, he said.

His client’s main concern was the horse’s welfare and to uphold a policy and principle its horses should be looked after until end of life.

The reason for this is that there has been a public debate about abuses within the industry in which identifying microchips in low value thoroughbreds have been removed and the animals have ended up in poor circumstances in homes or sent abroad, counsel said. Thistle tried to ensure this did not happen by sending them for slaughter.

Mr Derwin, in an affidavit, said the driver of the horse box who was taking a number of horses from Thistle for slaughter called him to say he might be interested in the Tartan Spartan.

He had no dealings at all with Thistle and was “aghast” when he was informed an injunction had been granted against him earlier this month. His reputation was vital to his business and Thistle had defamed him and done irreparable damage, he said.

Mr Fenton, whose wife Patrica Hogan says she is now the registered owner of the horse, said in an affidavit that Thistle “is embarrassed at having sold a perfectly good horse”.

He was contacted last July about a horse which Mr Derwin had, decided to take a “second look” at it and put it into training at his Carrick-on-Suir farm.

Thistle, he claimed, was now “trying to take advantage” of his hard work in bringing the horse back to racing form.

James Nicholson BL, for Mr Derwin, said the crucial issue in this case was that Mr Hughes had got rid of “an obviously good horse” and “suddenly Mr Hughes’ reputation is on the line with his boss Mr Long”.

Dermot B. Cahill, for Mr Fenton, said his client acted as a bona fide purchaser and, when he saw the animal “took a chance on him”.

Mr Hughes, on the other hand, failed to take proper steps to ensure the animal was sent for slaughter.

“He is the author of his own misfortune and his misfortune should not be visited on Mr Fenton,” counsel said.

1 Coronavirus: No swift return to ‘normal state of affairs’, warns expert
2 Coronavirus: Ireland will have to ‘live alongside the virus’
3 Chief medical officer urges people not to visit hardware stores
4 French police turn back private jet of holidaymakers from UK
5 Coronavirus: Government to extend restrictions for at least two weeks
Real news has value SUBSCRIBE