‘Gay cake’ case: Bakers may have new route of appeal 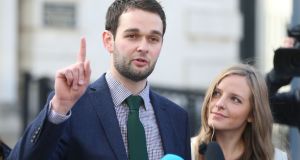 Christian bakers found to have unlawfully refused to make a cake with a pro-gay marriage slogan may have a new route of appeal to the UK’s highest court, it has emerged.

Lawyers for the McArthur family had believed they were left with no further challenge to verdicts reached in the landmark civil action.

But senior judges in Belfast have now raised the possibility that a section of the Northern Ireland Act 1998 could provide them with a way of getting to the Supreme Court.

Adjourning the case, Lord Chief Justice Sir Declan Morgan told counsel for the McArthurs: “You need to make a decision whether you wish to pursue it.”

Last month the Court of Appeal upheld a finding that the family, who run Ashers’ Baking Company, directly discriminated against customer Gareth Lee due to his sexuality.

Northern Ireland Attorney General John Larkin QC was expected to seek formal approval today of his intention to refer the verdict to the Supreme Court.

However, his legal move has also been put on hold following the emergence of another potential route.

David Scoffield QC, for the McArthurs, told the court: “We are happy to look at that and confirm our submissions in writing.”

Mr Lee sued after his order was declined at Ashers’ Belfast city centre shop in May 2014.

The gay rights activist had requested a cake depicting Sesame Street characters Bert and Ernie below the motto ‘Support Gay Marriage’ for an event to mark International Day Against Homophobia.

Bosses at the bakery refunded his money for the order because the message went against their Christian faith.

The family insist their problem was with the cake and not the customer.

But Mr Lee claimed he was left feeling like a lesser person.

Last year Belfast County Court held that the bakery had unlawfully discriminated against him on grounds of sexual orientation and religious belief or political opinion.

The firm was also ordered to pay £500 compensation to Mr Lee, whose legal action was backed by the Equality Commission.

During a four-day hearing at the Court of Appeal lawyers for the McArthurs argued it would have been sinful for them to complete the order.

Counsel for the family claimed it was wrong to force them to choose between operating a business or adhering to their faith.

Rejecting allegations that the bakery subjected Mr Lee to direct discrimination, he insisted the refusal was solely due to conscience and nothing to do with the customer or his political opinion.

Anyone else asking for the same cake would have received the same response due to the family’s religious beliefs, the court heard.

Mr Larkin, Northern Ireland’s top law officer, backed the McArthurs’ case by contending that forcing them to complete the order could amount to cruelty.

He submitted that it was wrong to force them to express a political view in conflict with their faith, adding that they should have constitutional protection.

Counsel representing the Equality Commission argued that the family’s entitlement to express religious beliefs should not “trump” Mr Lee’s rights.

He told the court that the bakery’s objection to using the word gay meant there was direct discrimination.

Backing that position last month, Sir Declan held that the company cannot provide a service that only reflects their own political or religious message in relation to sexual orientation.

The Lord Chief Justice, sitting with Lord Justices Weatherup and Weir, pointed out that the McArthurs had not been asked to support gay marriage.

In his ruling he said: “The fact that a baker provides a cake for a particular team or portrays witches on a Halloween cake does not indicate any support for either.”

The case returned to the Court of Appeal today following notification by the Attorney General of his intention to make a reference to the Supreme Court.

Instead, however, proceedings were adjourned to allow the family’s legal team a chance to examine a potential appeal option under schedule 12 of the Northern Ireland Act.

Sir Declan stressed the need to reach a final outcome.

He told the parties: “We want to make sure we hear it this term.”