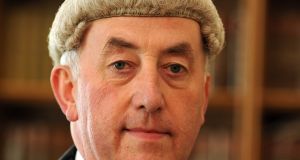 The existing evidence is the woman has capacity and has chosen for herself to live as she does, Mr Justice Peter Kelly concluded. Photograph: Aidan Crawley

A judge has refused to initiate a wardship inquiry in the case of an elderly woman living in “squalor” with no running water or electricity after a psychiatrist concluded she has capacity to make “unwise” decisions about her living conditions.

“Eccentricity is not a basis for invoking the wardship jurisdiction,” High Court president Mr Justice Peter Kelly said on Friday. He was refusing to send a court appointed doctor to assess the woman’s capacity, not because he did not have great concern for her welfare, “I do, anyone would in regard to someone living in these conditions”, but because there was no evidence at this stage to justify such a serious order.

The HSE could renew its application if the position changes, he added.

The case came before the judge after lawyers instructed by members of the woman’s family wrote to the wards of court office expressing concern her physical and mental health was deteriorating.

On Friday, Patricia Hill, for the HSE, asked the judge to direct a court appointed medical visitor to attend the woman, aged in her 70s, to assess her capacity. Counsel said the woman is a vulnerable adult and, although a consultant psychiatrist who assessed her at her home less than two weeks ago concluded she has capacity, the HSE still had concerns and wanted another report from a medical visitor.

A social worker team leader with the HSE told the court the woman’s living conditions are squalid and her situation has prompted concerns among family, neighbours, her rural community, gardaí, social workers and others for some time. The woman lives alone in an isolated area and shares her home with more than 20 cats, the court heard.

She walks a number of miles regularly to her local village to shop, collect her pension and attend Mass but has refused all offers of assistance from family and others. She buys bottled water and sometimes prepared meals and her stove at home is malfunctioning, causing the house to be smoke filled, but she had refused to have it repaired. She refuses to attend her GP’s surgery and the GP will not attend her at home because of the living conditions, the court heard. The team leader said any attempt to forcibly remove the woman from home for a capacity assessment would distress her and be counterproductive.

Any such assessment would have to be carried out at the woman’s home, she believed. The psychiatrist who assessed the woman at home had yet to provide his full report, but had concluded the woman has capacity to make unwise decisions about her living conditions, has no mental illness, a likely low IQ and is eccentric.

He also expressed the view it would be “inappropriate and inhumane” to pursue wardship for her or detention under the Mental Health Act.

Mr Justice Kelly said he had no doubt the woman is a vulnerable person living in primitive conditions in an isolated area.

He noted the team leader, whom he commended for her support to the woman, had said she has lived independently, refusing all help and without formal supports, for years, but there are concerns whether her physical and mental health has deteriorated. It is a serious thing for the court to order a capacity assessment under the 1871 Lunacy Regulation Ireland Act and the power to do so had to be triggered with some element of medical evidence that a person lacks capacity, he said.

The existing evidence is the woman has capacity and has chosen for herself to live as she does, he concluded.