Dentist struck off register over unlawful export of cancer drugs 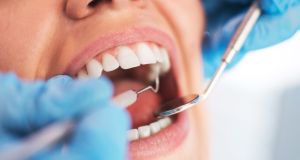 The court heard that the dentist had an ‘unblemished record’ for 40 years as a practising dentist in Carlow. File photograph: Getty

A dentist has been struck off the register of dentists by the High Court arising from his conviction for offences related to the export of unregulated cancer drugs to Middle Eastern countries.

High Court president Mr Justice Peter Kelly said it was a “sad situation” for Jim Madden that he faced erasure as a result of his convictions in June 2018 at the District Court. The court heard that Mr Madden had an “unblemished record” for 40 years as a practising dentist in Carlow.

The judge said it had to be made clear those convictions are “very serious” with the offences relating to oncology products where the “highest standards” have to be adhered to. He was satisfied the Dental Council, in deciding on erasure, had addressed all relevant factors, including the need to protect the public and the reputation of the dental profession.

The council had also given “careful and detailed” consideration to evidence and submissions advanced in favour of Mr Madden, including that no member of the public was adversely affected by the matters giving rise to his conviction, he said. The court saw no reason not to grant the application by solicitor JP McDowell, for the council, for the erasure order, he concluded. In June 2018, Mr Madden, of Tullow Street, Carlow and his daughter Orna, a qualified barrister, of Hanover Dock, Hanover Quay, Dublin, were each fined €1,000 by the District Court after pleading guilty to breaking medicinal regulation laws.

District Court Judge Michael Coughlan said, had the two been found guilty following a trial, he would have considered imposing jail sentences. The District Court case followed a year-and-a-half long investigation by the Health Products Regulatory Authority, initiated following a complaint from the Israeli health ministry.

Mr Madden, the District Court was told, had wanted to bring down the cost of cancer medication here and had entered into a partnership with Taj Accura Pharmaceutical in India. He and his daughter Orna were executives with Taj Accura Pharmaecutical (Ireland) Ltd, incorporated in 2011 but no longer trading. The District Court heard controversial Indian-made generic cancer medicine was brought into Ireland from India via Istanbul, Turkey, and was rebranded by the Irish company so as to appear that Ireland and the UK, which, along with the US, have higher testing standards, were the countries of origin.

It was then resold to counties in the Middle East. The charges related to cancer medications Fluourouracil, Afhlan and Melphalan. In seeking erasure, Mr McDowell said it was “significant” the transactions at issue were supported by falsified documents. He said the matter first came before the council in February 2019 but was adjourned several times to facilitate Mr Madden in making submissions and for health reasons. The council had considered all the submissions advanced by Mr Madden against erasure, including that would mean great hardship for him, said Mr McDowell.

The importance of maintaining the reputation of the dental profession was to the forefront of the council’s decision that it had “no option” except erasure. In separate proceedings in 2012, Mr Madden and his wife Mary consented before the Commercial Court to orders requiring them repay more than €37 million to Irish Bank Resolution Corporation arising mainly from their personal guarantees of loans advanced by Anglo Irish Bank from 2005 for development of the Whitfield Clinic, a private hospital in Waterford. Mr Madden is no longer involved with that clinic.