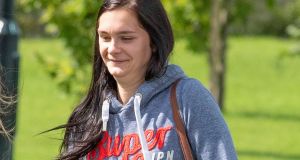 A mother of three who took a Co Donegal pensioner’s bank card and used it to steal her life savings of almost €27,000 has been jailed for 18 months.

Alicia Shaw (24), befriended Brid Murphy (now aged 82) from Buncrana and went to do shopping for her.

However, she began withdrawing up to €700 a day without the knowledge of Ms Murphy after she obtained her bank card and PIN number.

Letterkenny Circuit Court heard how Ms Murphy had worked with both the ESB and in a legal firm and sent all her children to third-level after her husband Frankie died aged 51.

She was preyed upon and robbed by Shaw from Kingscourt in Cavan between February and March in 2015.

The fraud was first noticed when Ms Murphy received her six-monthly bank statement. She became aware a huge sum of money was missing from her account and notified gardaí.

Gardaí launched an investigation and downloaded CCTV footage from the bank from February and March 2015.

A woman in her 20s was observed in the footage withdrawing money on a regular basis at times that matched the withdrawals of Ms Murphy’s money.

Garda Caroline Whelan lived on the same housing estate as the accused and noticed she was friendly with the victim.

When she was arrested on suspicion of the thefts, Shaw initially denied the accusations and said she was using her own card.

She then claimed that her friend gave her the card and asked her to withdraw the sums of cash but did not know the card was stolen.

However, she later admitted the thefts.

He said the thefts were devastating for Ms Murphy and her family.

He took into account Shaw’s age, the fact she had no previous convictions, suffered from ADHD, chronic low self-esteem and dyslexia and was remorseful.

He said he was sentencing Shaw to three and a half years in prison on each charge. He suspended the final two years of the sentence.