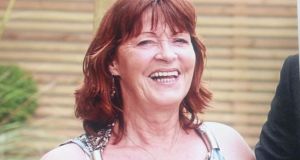 Patricia O’Connor (61) whose dismembered remains were found scattered across the Dublin and Wicklow mountains.

A jury is expected to begin deliberations on Monday in the trial of a 35-year-old man accused of murdering a retired grandmother, whose dismembered remains were found scattered across the Dublin and Wicklow mountains nearly three years ago.

Mr Justice Paul McDermott will finish charging the jury on Monday in the Central Criminal Court trial of Kieran Greene, who has pleaded not guilty to murdering Patricia O’Connor (61) at her home in Mountainview Park, Rathfarnham, Dublin 14 on May 29, 2017.

The deceased’s daughter Louise O’Connor (41) and granddaughter Stephanie O’Connor (22), both of Millmount Court, Dundrum Road, Dublin 14, and Louise O’Connor’s ex-partner Keith Johnston (43), of Avonbeg Gardens, Tallaght, Dublin 24, are all charged with impeding the apprehension or prosecution of Mr Greene, knowing or believing him to have committed an arrestable offence, to wit the murder of Mrs O’Connor on May 29, 2017.

The six-week trial heard that the body of Mrs O’Connor was dismembered into 15 separate parts that were found at nine different locations over a 30km range in the Dublin and Wicklow mountains between June 10th and 14th, 2017.