Graham Dwyer trial hears of night out with childhood friend 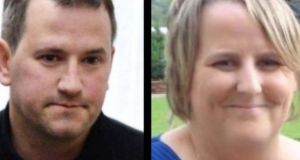 Telecoms engineer produces maps showing the particular coverage area for phone network “cells”, carried on phone masts through which phone calls are made.

A childhood friend of Graham Dwyer gave evidence at the Central Criminal Court of a night out they had in July 2011.

Toll records tracing the movements of cars owned by Mr Dwyer were also entered in evidence.

Mr Dwyer (42), an architect from Kerrymount Close in Foxrock, is charged with murdering childcare worker Elaine O’Hara (36) on August 22nd, 2012. He has pleaded not guilty.

Colm Costello told the court he was originally from Bandon, Co Cork and knew Mr Dwyer for 39 years, since they were small children in nursery school.

He said he moved to Dublin in 1995, after Mr Dwyer had moved, and they were in touch regularly since then.

He agreed with Sean Guerin SC, for the prosecution, that he and Mr Dwyer and four others met up on Saturday, July 2nd, 2011. They met in Mr Dwyer’s home in Kerrymount Close and then went to the local pub for a few drinks, before returning to his house.

He said there was nothing unusual about the evening. He hadn’t seen Mr Dwyer for some time and they were planning a school reunion for their 20th anniversary.

Also giving evidence, Tracey Burke, from Easytrip, agreed she dealt with an application from gardaí for Mr Dwyer’s toll records.

Said there were three tags associated with Mr Dwyer’s account. She agreed with Sinead McGrath BL, for the prosecution, that an eflow tag ending in 470 was registered to Mr Dwyer and used for a blue Audi TT and a Landrover Freelander. She agreed the records showed the Audi TT passed through the M4 East Kinnegad toll on July 4th, 2012 at 6.04am, travelling from Dublin to Galway. It passed the N6 toll at Ballinasloe at 7am, and at 12.45pm and passed the M4 West Kinnegad toll at 1.47pm.

Ms Burke also agreed with Ms McGrath that she provided the history for all three tags and that she noted the 470 tag was used more often.

The trial heard earlier from a telecoms engineer about how data was complied on phone numbers related to the case.

Conor O’Callaghan, a telecoms engineer with Vilicom Engineering Ltd, produced maps showing the particular coverage area for phone network “cells”, carried on phone masts and through which phone calls are made.

He said he supplied gardaí with data for 458 cells on the O2 network, 46 of which were in the Dublin area.

He explained how phones connect to the cell with the strongest signal in their area and as the signal degrades and a caller moves towards coverage of another cell, it stays with the weaker signal for a set period before changing to the stronger signal. He said a person would not change cells if they hadn’t moved.

Ronan Kennedy BL, for Mr Dwyer, suggested a phone might not be connected to the cell nearest to it.

Mr Kennedy also asked about the overlapping of service from cells. Mr O’Callaghan said it was very important that there was not too much overlap, as this created “pilot pollution” and made it more difficult to make a phone call.

Mr Kennedy suggested the cell models Mr O’Callaghan produced for the court did not necessarily show the “service area” for those cells.

Mr O’Callaghan disagreed. He said if a caller used a particular cell, he knew the call occurred somewhere in the cell area. He also said his models took into consideration differences in possible cell positions between 2012 and 2014, when he produced the models.

“So there were no changes for these 46 cells over that period of time?” Mr Kennedy asked.

“No, what you want is your network in a steady state,” Mr O’Callaghan responded.

The trial heard Mr O’Callaghan provided data related to an 086 number used on the O2 network and two other 086 numbers on the Three network.

One of the numbers belonged to Ms O’Hara, another was a Nokia 1616.

Jamie Clifford, Hutchinson 3G UK Ltd, trading as Three, gave evidence of providing data on an 083 phone and an 087 phone.

The 083 number, for a prepay phone, was purchased in March 2011 and registered to “Garoon Chasholn with an address at Oak Lawn, Clerihan, Co Tipperary.

The 087 number was a contracted number, connected in April 2011 and was registered to A&D Wejchert.

Mr Clifford agreed he provided records to gardaí for this phone from October 7th, 2011 to November 30th, 2012.