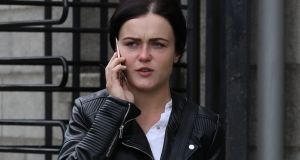 Roxana Pach, of Lucan, Co Dublin, at the Four Courts after her Circuit Civil Court action for damages was dismissed. Photograph: Collins

A trainee dental nurse who was called “a f**king skankhole” by a Dublin Bus driver has lost a €75,000 damages claim for defamation of character.

Roxana Pach, of Hansted Road, Lucan, Co Dublin, claimed the remark meant she was a woman of low morals, promiscuous, dishonest, socially undesirable and a prostitute.

Ms Pach told the Circuit Civil Court that on the evening of November 11th, 2015 she boarded a city-bound bus at Adamstown, Dublin, and was told by the driver to leave the bus and pick up some litter he said she had dropped.

She was embarrassed and had refused to do so. She asked for her ticket and he just stared at her. She had to repeat her request and he had then processed the transaction.

After doing so he had called her “a f**king scank” which greatly upset her. When eventually leaving the bus at her stop he said: “A f**king scankhole.”

The driver told barrister Jeri Ward, counsel for Dublin Bus, that there had been an exchange between them regarding the dropping of litter but he denied having used the words she claimed he had.

Circuit Court President, Mr Justice Raymond Groarke, said the court was satisfied the driver had made the remarks complained of.

Ms Ward said: “In day to day situations people use throwaway comments of criticism which are not meant in any defamatory manner. The bus driver got annoyed when the plaintiff refused to pick up the litter but no reasonable person would pick up the meaning of the plaintiff being a woman of low moral standing, promiscuous or a prostitute by the remarks that had been made by the driver.”

Judge Groarke said Ms Pach had thrown litter onto the ground and he had complimented the driver for having taken her to task for that conduct. He had directed her to pick up the litter and put it in a bin at the door of the bus and she had said she would not.

“I have found that he uttered the words complained of and there is no question that the words used have the potential to be grievously defamatory of a woman in particular,” Judge Groarke said.

The question before the court was, would it be reasonable for anyone hearing those words spoken in the particular context of refusing to pick up the litter, determine Ms Pach was a person of low moral character.

Judge Groarke said he did not think so. In the real world, words were used for purposes of insult and causing offence and the words spoken by the driver had been used as a reprimand.

Dissmissing Ms Pach’s claim he said it seemed no half-intelligent person in the city of Dublin, hearing the discourse about not having picked up the litter, would conclude from it that she was an easy woman of low morals and low character.

Judge Groarke, stating that the words should not have been spoken, made no order as to costs against Ms Pach.