Girl scout was ‘stabbed’ in knife-throwing incident at camp

Girl’s father instructed scout leaders to take her to hospital but they refused , court told 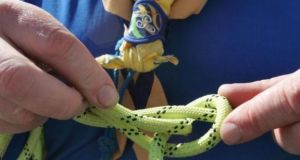 Scouting Ireland Services and Scouting Ireland Campsites Facilities Ltd were sued over the incident and liability had not been conceded, the court heard. Photograph: Brenda Fitzsimons

A teenage girl scout was stabbed in a knife-throwing incident at a campsite after three scout leaders had gone off on a shopping trip following a knife-skills demonstration, a judge heard on Tuesday.

Barrister William McLoughlin told Mr Justice Raymond Groarke in the Circuit Civil Court that his then 15-year-old client was one of a group of scouts who had been given knives and shown knife skills before having been left alone by their leaders.

With only an 18-year-old girl in charge of the whole group, individual members had started playing with the knives and flicking them around.

“Unfortunately one of the girls had flicked a knife that had accidentally struck his client in the chest, causing a heavily bleeding wound,” Mr McLoughlin said.

Mr McLoughlin, who appeared with Gary Matthews Solicitors, said the 18-year-old who had been left alone to look after the group had given the injured girl a plaster. There was no first aid available to anyone at the time.

He told Judge Groarke that when the scout leaders returned from their shopping trip they examined the wound to the girl’s right breast and described it as “just a slight cut”.

Mr McLoughlin said the injured girl, who he was representing in court, had phoned her father a number of times over the following 24 hours stating that, in her opinion, the wound was more severe than anyone else realised.

“The girl’s father had instructed the scout leaders to bring his daughter to the accident and emergency department of the nearest hospital but they had refused,” Mr McLoughlin said. “Instead they brought her to a pharmacy where, fortunately, the seriousness of the injury was recognised by the pharmacist who recommended she be brought to hospital immediately.”

Counsel said that following the incident in August 2017 his client had become very sensitive about her injury and had given up sports because she was embarrassed about undressing in front of others.

The girl, who is not being identified to save her further embarrassment, had been treated by a number of doctors and a plastic surgeon had been consulted with regard to a scar and lump she had been left with on her right breast.

Mr McLoughlin said it had been estimated that a significant sum would have to be spent on surgery to remove the lump and try to reduce the scarring.

He said his client had sued Scouting Ireland Services and Scouting Ireland Campsites Facilities Ltd and the Personal Injuries Board had assessed compensation at €26,000 which had not taken into consideration the cost of the necessary surgery.

Mr McLoughlin told Judge Groarke that despite the circumstances of the injury and the claimed negligence and breach of duty of the defendants, liability had not been conceded and he was not recommending acceptance by the court of the board’s assessment.

He felt the required surgery costs and the significant psychological and cosmetic issues for a young woman now approaching her 18th birthday had never been properly appraised.

Judge Groarke made an order refusing approval of the assessment and awarded the teenager the costs of her legal team having to bring the application before the court on Tuesday. The case will now go to trial before another judge.