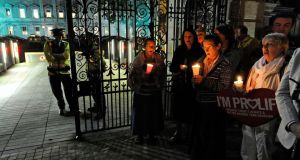 Anti-abortion protestors outside the Dail earlier this month as the amendments to the Protection of Life During Pregnancy Bill were being voted on. Photograph: Dave Meehan

Anti-abortion groups have confirmed they supported this week’s High Court case taken by a man who was trying to preventing his girlfriend travelling to the UK for an abortion.

Representatives from the Society for the Protection of Unborn Children (Spuc) and Precious Life also said they were willing to cover the legal bill for the proceedings and offer other financial help if needed.

The man had said in court on Wednesday he believed his girlfriend was being forced to undergo the procedure by her parents. The proceedings were struck out this morning after counsel for the man said he was withdrawing his application in light of an affidavit from his girlfriend.

Bernadette Smyth of Belfast-based Precious Life claimed the couple made contact with its counselling service through the Citizen’s Advice Bureau in Northern Ireland.

“There were very happy in their relationship and the involvement of parents caused some problems,” said Ms Smyth, who handed the woman rosary beads outside the courtroom.

“They were both very happy with the pregnancy, there were no issues there.

“The couple were not planning to abort the baby.

“It was important the decision they had both made was protected.”

Ms Smyth said its service informs women of the consequences of having an abortion.

“Life is precious and we in society should always be providing support to any woman, any parent, who would face a crisis pregnancy,” she said.

“There is always a better way.

“This is why we are involved here today to ensure that mother and child are protected and families who would be involved in coercion are aware of the consequences of abortion.”

Liam Gibson of Spuc said the issue of coercion “is something that really needs to be seriously looked at”.

He confirmed the couple’s legal fees would be paid if needed, but hadn’t been to date.

“Costs are a secondary issue, the life of a child and the safety of the mother is of paramount importance,” he added.

Covid-19: AstraZeneca vaccine should not be given to patients under 60, Niac advises