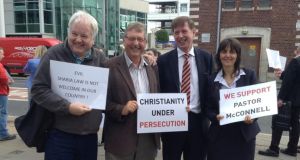 Protesters, including DUP MP Sammy Wilson (second from left), turned up in support of Pastor James McConnell in Belfast.

Christian preacher Pastor James McConnell has said he wants to be “exonerated, liberated and set free” after he pleaded not guilty at a Belfast court in connection with charges he faces over a sermon where he branded Islam as “satanic”.

At Laganside court on Thursday, the north Belfast preacher’s solicitor Joe Rice said his client would be pleading not guilty to the case prosecutors have taken under the 2003 Communications Act.

Supporters, including DUP MP Sammy Wilson, gathered outside the court holding placards to protest what they described as the pastor’s right to free speech.

The fundamentalist preacher, who retired in 2014, sparked outrage when a controversial sermon, where he described Islam as “heathen” and “spawned in hell” was streamed online from Whitewell Metropolitan Tabernacle on the Shore Road in north Belfast.

Following the short hearing, Pastor McConnell (78) told The Irish Times the case was a waste of money, he was not a racist and wanted to be “exonerated, liberated and set free”.

“I feel really good,” he said. “The support is amazing. I never dreamed of such support. I am absolutely not guilty. I want to be exonerated, liberated and set free. I am not guilty.”

Pastor McConnell also said he would “not go back” on what he preached and said “whenever I get rid of all this I will be preaching the same message”.

Mr Wilson said Pastor McConnell was a personal friend and had his full support. “I believe there is an important principle at issue here,” he said. “Someone should have the right, albeit with certain constraints on them. I mean they can’t use it to incite hatred, or whatever, but if they believe something passionately they should have the right to express those views in a way which they choose.

“Once the state starts to get involved in saying we are going to limit what you can say, we are going to put curtailments on the rights which you have to do what you believe in your heart to be right, or whatever, I believe we are going down the wrong road.”

Mr Wilson also said it was significant that people who are strongly opposed to Pastor McConnell, with views opposite to him “realise the dangers of this prosecution”.

He is expected back in court on September 3rd.