Five Red Limousin heifers were shot dead by the Defence Forces on a farm in Co Monaghan on Tuesday as part of a bankruptcy seizure. They were killed after attempts to move them failed. Video: John Hoey 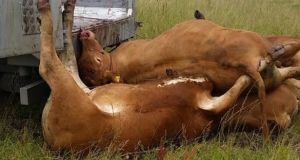 The ISPCA has described the shootings of five heifers by soldiers on a farm in Co Monaghan as ‘horrific and unnecessary’.

The Irish Society for the Prevention of Cruelty to Animals (ISPCA) has described the shootings of five heifers by soldiers on a farm in Co Monaghan as “horrific and unnecessary”.

Minister for Agriculture Michael Creed has been called on to provide a full explanation of why the Defence Forces were deployed to the farm.

The Red Limousin heifers were shot on Tuesday, with the approval of the Department of Agriculture, as part of a bankruptcy seizure on the farm of John Hoey at Annacroft, outside Carrickmacross.

Mr Hoey, who has been investigated by the Criminal Assets Bureau, was declared bankrupt in February and his assets were seized by Chris Lehane, the official assignee in charge of bankruptcies.

Most of his herd, which had tested positive for TB, was removed. But the five heifers, described by Mr Lehane as “wild and dangerous”, could not be caught and were shot.

A spokeswoman for the ISPCA said while the images of the animals were very upsetting, it appeared no animal welfare offences had been committed.

“However, the ISPCA believes that the use of lethal force could have been avoided in this case,” she said.

“We have raised our concerns with the Department of Agriculture, Food and the Marine in the strongest possible terms and we expect lessons to be learned by DAFM and the other agencies involved, so that incidents of this nature never happen again in the future.”

He said he had asked the Minister for a full explanation.

“One would expect this type of measure was taken because of very exceptional circumstances, but having said that, I don’t see how sedation of the animal couldn’t have been an option in this case,” he said.

In the Dáil yesterday , deputy Michael Healy-Rae said the action was “outrageous”.

“This house should say, ‘shame on them’. It was a disgraceful, despicable act.”

“I know, as well as the deputy, that diseases in our herd can have a huge impact on the fortunes of the entire farming sector if they are allowed get out of hand,” he said.

Minister of State for Justice David Stanton said there was “no basis in reality” to “offensive remarks” about the role of the Defence Forces in the cull.

He told the Dáil “the Defence Forces carried out the humane cull of five animals on a farm in Co Monaghan due to a significant concern for public safety.

It is not correct, as has been alleged, that the cattle were treated inhumanely or that this case involves the operation of debt collectors.”

Mr Stanton was responding to Opposition TDs who called for an explanation of apparent “Wild West” behaviour.

He warned them to “be very careful in rushing to judgment about this case”. He said the official assignee in the bankruptcy case, the Defence Forces, the Department of Agriculture and An Garda Síochána only acted as “a matter of last resort and in the public interest”.

His call was supported by Independent TD Clare Daly who said the incident had caused enormous disquiet among farmers, people threatened by banks, animal welfare supporters and people concerned about the way the State operates.

1 ‘I’m not going to go into any more detail’ - Varadkar faces drugs question again
2 ‘I get paid to learn. I couldn’t recommend it enough’
3 Chance of snow as Ireland set for cold snap from Sunday
4 Teen arrested by gardaí investigating Cameron Blair murder
5 Varadkar’s coalition offer an attempt to wrong-foot Martin’s drive for ‘change’
Real news has value SUBSCRIBE