Ryanair defends policy by saying it can’t afford to take the risk of a £4,000-per-passenger fine 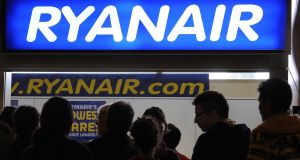 We received a long email from an American reader, Michael Walsh. It had, in the subject line, the intriguing word “Pirates”.

“With the exception of those roaming off the coast of Somalia, I thought we Marines had effectively eradicated pirates during the Barbary wars of the 1800s. I was wrong,” the email begins. “But they’re alive and, having commandeered the Irish harp to replace the more traditional skull and crossbones, operate in the open at Gatwick Airport.

“Looking forward to a first-time meeting with Irish relatives, we checked in at Gatwick’s Ryanair desk,” Walsh continues.

He and his companions showed their already-printed boarding passes, “and – this point is important – our American and British passports (two each in our party of four). After checking in one bag, we were waved on with a smile.”

They went through various security checkpoints to the boarding gate, where they were notified that “we did not have a ‘visa stamp’ on our boarding pass and the pilot was ‘not accepting any passengers without this required document’. A pilot making an arbitrary decision about passengers? And a ‘visa stamp’ required to travel from Gatwick to Dublin? What the hell was this all about?

“Turns out we non-EU passport holders needed to have our boarding pass ‘stamped’ when checking in. Note: our two relatives travelling on British passports had no such requirement. For clarification, this requirement is not a ‘visa’, it is simply Ryanair absconding with the term for their own cynical use.”

Walsh asks why the check-in desk does not automatically give passengers this stamp and says that the stamp “was not available at the flight service desk, within the secured area of the airport”.

So Walsh, his wife and their niece and nephew, as well as a “lovely couple from Mexico and a Chinese lady”, were led through the lengthy immigration exit.

“When we finally arrived once more at the check-in counter, we requested a hearing with the manager. He was not a Ryanair employee but did say that the requirement for this hall pass before boarding is ‘at the discretion of the pilot’.

“I had heard right: discretion of the pilot. And, he emphatically added, ‘requesting it is your responsibility’. If there was a joke in here somewhere, I wasn’t getting it.”

The process took the group beyond the departure time of their flight. “Though miffed in the extreme, we inquired about boarding the next available flight, after, of course, obtaining our Ryanair hall pass. We were informed with a straight face and blank stare that we would have to pay £100 each (near double the original fare) for replacement tickets and pay again for our checked bag.”

It got worse. There were no seats available for the rest of the day. As a result, Walsh and his party lost their original flights to Dublin, their nonrefundable overnight accommodation and rental car obligation. They also had to cover the cost of unscheduled car-hire fares from and back to Gatwick, and they lost a full day with extended family in Ireland.

“Plus there was the added cost to board a BA flight early the next morning, where, having asked about any such requirements on their flights, the BA attendant offered us her best sympathetic head nod.”

So what could justify all this? “A reasonable question, though not even one of the many Ryanair employees at Gatwick or in Dublin could provide an answer.”

In response Ryanair denied there was any pilot discretion involved. Initially it said all non-EU/EEA passengers would be denied boarding. We pointed out that its website rules do not say that – but they do say that the airline reserves the right to refuse travel if there is a failure to comply with its visa requirement.

Ryanair accepted that point. “But generally the only place where such exceptions can be facilitated at boarding gates is at Dublin and Stansted, where we employ our own handling staff and our boarding gate staff are in radio contact with check-in, who can verify some (ie US) but not all, non-EU/ EEA customers’ nationality and visa compliance. It was inaccurate to state that ‘all’ such passengers will be denied travel, but the vast majority are refused if they don’t check their visa status at our ticket or check-in desk.”

In a statement, Ryanair said pilots have no discretion or involvement in this process. “There is no ‘ambivalence’ in this policy. Unless we are certain (at the boarding gate) that there is no visa issue, we will not let non-EU/EEA passengers travel, because the immigration authorities impose £4,000/€4,000 fines per passenger if we fail to verify the correct visa/document check. We cannot afford to take this risk.”

The statement said that, unlike other airlines, “which encourage airport check-in, our problem is that we only meet 80 per cent of passengers (ie those who don’t check in bags) at the boarding gates, the vast majority of which are staffed by handling agents who have no idea what visa requirements are (because this expertise is usually provided at ticket desks).”

In relation to the specifics, the statement said “these two US citizens checked in online and had no checked-in bag, which was why these passengers did not have their passports or visa requirements noted or checked at the bag-drop desk in Gatwick. They were travelling with a UK citizen, who was the only passenger to check in a bag, and no visa issue arose in relation to this UK citizen.”

The airline acknowledged that these customers “should have been advised by the handling agent at the boarding gate in Gatwick that they could transfer to the next available flight – without charge – subject only to getting their visa checked, and we apologise sincerely for this agent error.

“In the circumstances, we have refunded the £22 one-way air fare paid by each of these four passengers. You can see why we will not risk a £4,000-per-passenger fine.”