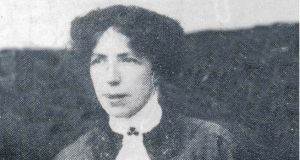 Cissie Cahalan, trade unionist, feminist, and schoolteacher’s daughter, was born in Tipperary or Cork. She earned her living as a shop worker in Dublin, mostly at Arnotts of Henry Street.

She was a member of the Irish Drapers’ Assistants’ Association (IDAA, now Mandate) from its earliest years, and a campaigner for women’s suffrage in the Irish Women’s Franchise League (IWFL) from 1908.

The different worlds of her activism came together in 1912. A seasoned speaker on suffrage platforms, she was an IWFL delegate seeking Dublin Trades Council’s support for women’s suffrage. She headed the IDAA Dublin branch’s new Ladies Committee and wrote for the union journal.

Cahalan opposed the first World War, supported inclusive trade unions for all shop workers, women and men, and campaigned for equal pay. In 1918 she headed a strike at Arnott’s that won a 30 per cent pay increase. She was on the IWFL executive committee, 1917-18. She attended the Irish Trade Union Congress (ITUC) as an IDAA delegate from 1917, serving on the executive from 1922 to 1923, when she resigned in protest at inaction about internment.

She was elected president of the IDAA in 1922, 1923 and 1924, winning a minimum wage and ending the “living-in” system. Cahalan combined her commitments with a demanding day job until 1932. She wrote for her union journal in the 1930s.

She was a lifelong friend of Hanna Sheehy Skeffington. In 1932 she married John Burns, and was widowed in 1936. She worked part-time at St Ultan’s hospital. She died on August 27th, 1948.