Walk for the weekend: a sea-to-summit ascent 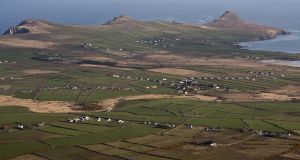 For many years, my first act in the morning in the house I stay in near Baile an Fheirtéaraigh has been to look out the kitchen window to see if there is cloud down on Cruach Mhárthain; if so, I abandon any plans for hill walking that day. Recently, while lounging on Clogher Beach and gazing up at its steep slopes, it dawned on me that I had never climbed it and it is a nice sea-to-summit exercise as a route starts from the south east corner of the beach

A track brings you out onto the R559. Turn right and about 600 metres on, you will come to a Dingle Way marker between a farm house and a large two-story building. This points uphill and at the top of the boreen a stony track leads on to the lower flank of Cruach Mhárthain.

There is an impressive landform on your right; a jagged outcrop of compacted volcanic rock known as the Minnaunmore Rock. Once you are past this feature, the view opens out to reveal the splendid array of the Blaskets.

The OS Map appears to indicate that the track comes out onto the lower end of a third class road, but in fact it joins up with it about three-quarters of the way up. Turn left here, and through a gate at the top which leads on to a green road that makes for wonderfully easy walking as it winds its way up through thick clumps of gorse and heather. You’ll be surprised to come across a stretch of cobbled roadway set in concrete which is the remnant of the set for Ryan’s Daughter.

Beyond this oddity, the track peters out, but a narrow water-logged pathway continues up the slope. There is an outcrop of rocks beneath the summit and it is best to go to the right of them and up to the peak (403m) where you will be greeted by a most astonishing view.

Because the northern side of the mountain is steep, you will find yourself looking straight down onto the complex pattern of fields which sweep up to the distinctive outlines of the Three Sisters and Ceann Sibéal. To the east, the great circle of Smerwick Harbour lies beneath the varied slopes of the Brandon mountain range.

To the south, there is a dramatic panorama encompassing Ventry and Dingle harbours, both emptying into the bay, beyond which lies the plenitude of peaks on the Iveragh peninsula. To the west, the Blaskets sit darkly on a silver sea.

Retrace your steps until you come to the second marker for Siúlóid na Cille, The Little Church Walk, a track which runs westward under Minnaunmore Rock on to the R559. Cross the road and follow the track down to the top of the cliffs. Leave it here and head north towards Spot Height (115m) which is on a serrated line of bare rock on Clogher Head. From here, head east to link up with your outward route.