In July, Irish and Canadian rowers will attempt the first crossing of the Northwest Passage in the Arctic Ocean, one of the world’s most notorious sea routes, in a single season 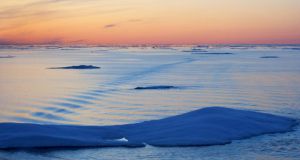 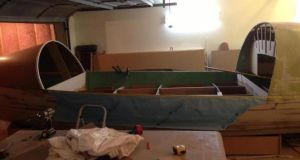 In just under four months I will sit into a 25ft rowing boat with three other men, high up in the Canadian Arctic, to embark on our quest to row 2,000 miles across the infamous Northwest Passage. My last expedition of this nature was a few years ago rowing across the Atlantic Ocean. On that occasion my sole team-mate was my then girlfriend, who is Canadian. The on-board scenery this time round will be far less attractive and a good deal hairier.

Northwest Passage is a sea route that connects the Atlantic and Pacific oceans. It is the collective name of the series of Arctic waterways through the Arctic Ocean, along the northern coast of North America, through the Canadian Arctic archipelago. The waterways separate the islands of the archipelago from each other and from the Canadian mainland.

This journey began two years ago in my adopted country of Canada, where I was giving an adventure-related talk. One of the other speakers at the Vancouver event was the accomplished Canadian adventurer Kevin Vallely, whose parents come from my hometown, Limerick. He holds the world record for the fastest trek to the South Pole and, as I was interested in going there one day, we arranged to meet after the show. I wanted to pick his brains about the Pole and he wanted to pick mine about the boat I used to row across the Atlantic.

For years, Vallely had contemplated an expedition that has never been done before. A handful of people have tried to cross the Northwest Passage, but nobody has yet traversed it in a single season under human power alone. He had thought about doing this, but attempting such a trip in a traditional kayak or canoe would be foolhardy. Setting off in an ocean-rowing boat would be an entirely different proposition, and so our expedition was born.

We knew that a four-man crew would stand a much better chance of success than a team of two so, when Vallely mentioned the idea to his friend Frank Wolf, we had the third team member. Wolf is another hugely accomplished Canadian adventurer, and the only person ever to canoe across Canada.


Enigmatic past
When a friend of mine, Denis Barnett, learned about the trip, he wanted in too. Barnett is from Dublin and although this is his first major expedition, he has an interesting adventure background in rally driving and skydiving. Together, on July 1st, we will embark on a voyage through not only one of the harshest places on Earth but one with a very enigmatic past.

The passage has an intriguing history. For centuries, it was the Holy Grail for explorers. If it did exist it could provide a trade route to the Orient, bringing fame and fortune to the explorer who achieved this feat. The history of the passage is shrouded in tales of tragedy, adventure and disaster. Many supremely equipped expeditions perished high up in the Canadian Arctic in their quest to find the elusive route.

The most infamous of these was the Franklin Expedition that departed England in 1845. The 129-man crew made it part of the way through the passage before their boats were crushed in the ice and the entire party died. Their ships, Erebu s and Terror , were never seen again. In the context of the Arctic, the search for these boats rivals that of the Titanic and the Canadian government believes it is close to finding the historic vessels. This summer, we will be rowing through what is believed to be the final resting place of these ships.

There is also a very significant Irish connection to the Northwest Passage in that the second-in-command on the infamous Franklin expedition was an Irishman, Francis Crozier. Crozier, from Banbridge in Co Down, was an experienced explorer who played a significant role in both Arctic and Antarctic exploration. So our 2,000-mile expedition will not only be a journey into one of harshest places on Earth but in a way it will also be a journey into history.

As a proud Irishman, I feel that Barnett and I, and Vallely, who is half Irish, have the opportunity to address some unfinished business for Ireland when it comes to the Northwest Passage. This is both exciting and nervewracking. We are attempting one of the last great firsts left to be done in the world today.

By the time our team of four came together, it was January 2012 and although we are not departing until July, 18 months really isn’t a lot of time to plan an expedition of this size. Putting four men with fairly strong personalities and relatively sizeable egos on a small rowing boat in harsh conditions for two to three months will require some good team dynamics.

Team bonding over the past year has been really important. A part of traditional team bonding often takes place indoors with a generous supply of tasty libations. We have done a bit of this but a lot of things in Vancouver happen in the great outdoors so training together has been another great way to get to know each other. I am 36 years old and Barnett is 32, and we have realised that 42-year-old Vallely and 47-year-old Wolf are phenomenal athletes. They hold a host of records in different disciplines. One day, while out on a two-hour hill run, Barnett roared at Vallely to “act his age” and slow down. I think Vallely ran faster after that.

A crucial part of our planning so far has been focused on our boat. We will need a boat similar to the one I used to row across the Atlantic. Ocean-rowing boats are designed to deal with the harsh conditions that an unpredictable ocean swell can dish up. They need to be tough and fully self-contained, with the ability to self-right in the event of a capsize. However our boat needs to be designed with slightly different considerations in mind.

Ultimately we are not rowing an ocean but the deeply challenging Northwest Passage where stiff winds, choppy swell and obstructive ice conditions will play a huge part in our progress. Our boat needs to be designed with these considerations in mind and our hull shape will differ from many traditional ocean-rowing boats. The vessel will also be reinforced with Kevlar to withstand any encounters with ice.

We have spent a lot of time trying to find a good fit and were delighted when an Irish company, Mainstream Renewable Power, came on board recently as our strategic partner for our expedition, which we have called the Mainstream Last First .


Choked with ice
The principal reason what we are attempting has never been done before is that, until very recently, the Northwest Passage remained choked with ice all year round and it just wasn’t possible to row. This is no longer the case and we want to use our expedition as a platform to highlight how quickly things are changing in the Arctic, and what these changes mean for all of us.

Sustainability and a greater move towards renewable energy are now of critical importance and Mainstream Renewable Power is taking a global leadership position on this by building wind and solar plants all over the world. We’ll be keeping Irish Times readers updated on our progress in the newspaper and online.


For m ore information on the expedition, see thelastfirst.com.