‘The pain was like a hand moving around inside my stomach’

If you suffer from inflammatory bowel disease, your stomach rules your life 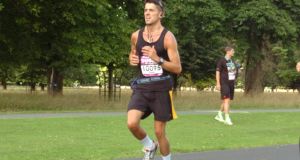 Not because I was waking up in a campervan in some part of Poland, hungover after losing to Croatia in the first round of the Euros with the rest of Ireland around me holding “Angela Merkel thinks we’re working” flags.

No, it lives in my memory because that was the day the pain started.

That was a Monday; it took until Thursday for me to go to the doctor despite having had nothing to eat or drink for three days. I remember waking up with my stomach bloated. The pain was even worse than before, like a hand moving around inside my stomach, clenching my organs and slowly releasing.

Crying in pain, I reached for my phone.

“Hello, Churchtown Medical Centre, how may I help you?” asked the calm voice.

Tears were rolling down my face, with one hand holding the phone and the other holding my stomach for dear life, I said, “My name is Doug Leddin, I’m a patient of Dr Mehigan. Tell him I’m on the way in. It’s an emergency, I’m in agony and I’ll be there in 10 minutes.” Then I just hung up the phone and drove as fast as I could.

“Appendix, it’s got to be your appendix,” said Michael, and he told St Vincent’s Hospital I was on my way. [I owe an awful lot to the late Dr Michael Mehigan, and I was never able to thank him.]

I can only describe the staff at St Vincent’s Hospital as amazing. They looked after me so well. They ruled out my appendix being the cause. They gave me a bed and some amazing painkillers that left me in a world of my own, followed by a Cat scan. I was so relieved not to be in pain.

Then, the moment that will stay in my mind forever. A new doctor appeared with a clipboard, dressed in a grey suit and a red tie and wearing glasses over which he peered while talking to me.

“Douglas Leddin, your Cat scan has come back and, unfortunately, it’s IBD.” I stared at him, confused, and said: “Sorry?”

The doctor gave me some reading material about inflammatory bowel disease (IBD) and Google gave me the rest.

As anyone who suffers from IBD or irritable bowel syndrome (IBS) knows, Google is filled with all sorts of information; some helpful, some untrue. So I still didn’t fully understand what I had. But with the online support of Facebook groups and information from the Irish Society for Colitis and Crohn’s disease (ISCC), I slowly began to understand it more.

Each person is affected in different ways. For me it means no alcohol – which, to be honest, I still find really tough. No pasta, bread, rice or potatoes. Excessive sugar intake is torture and one of the worst things is lasagne. I don’t know why, but my stomach finds it unbearable.

For IBD sufferers, your stomach rules your life; how your day is going to go, how a holiday will be, what your dinner will consist of and how much energy you will have. It’s a constant pain that I have to try to keep at bay every day.

Each person’s symptoms and pain levels are different and each person’s struggles vary. Mentally, I find it very hard to cope with certain things. I don’t enjoy not being able to go out and relax in a pub. I get upset taking numerous tablets every single day of my life. I’m 25 and I’m on my second pill box as my first one wasn’t large enough.

I suffer from lack of energy some days and have excessive energy on others; I sleep badly; I get terrible pain from standing too long; I get bloated if I eat too fast; I have irregular toilet movements from time to time; I am constantly monitoring food and so many other things; the list just goes on and on.

The condition rules my day-to-day life, and how I face it will decide whose life I’m going to live: my stomach’s life or my own.

I chose mine, but how? By doing what most can’t, and that’s exercise. Most can’t because the pain doesn’t allow them to or because their energy levels are too low. In August 2013, after living with IBD for more than a year and having been involved in a car crash that left me mentally fatigued, I decided enough was enough and that I was going to help myself.

Taking 30 minutes of exercise is described as taking a mild antidepressant, so I decided there was no harm in trying and I took up running.

It helps me focus my mind and to reach my goals. It helps me to keep my weight down. This definitely helped after a heavy dose of steroids and a car crash left me with a few stone to lose.

A year on, I have completed two half-marathons, numerous 10ks and the Dublin City Marathon.

I’m now training for the Las Vegas Half Marathon, which I am proudly doing for the ISCC in November, in order to raise much-needed funds for them and to raise awareness about IBD and IBS.

Running and general exercise, along with a change in eating habits, have left me in a much better and more stable place, physically and mentally.

Most importantly, running has helped me to reduce my flare-ups and pain, and allowed me to live as much of a normal life as I can ask for.

For anyone suffering with this disease, as hard as it is, try not to allow it consume your day-to-day life and your mind. Try to conquer it, and talk about it and, most importantly, seek information from the ISCC.

All of this has helped me and I hope it will help others. It’s not easy, but it can be done. And I’m by no means fine, but I’m better than I was yesterday, and I’ll be even better tomorrow.

To support Doug Leddin’s Las Vegas half marathon for the ISCC, see idonate.ie/lasvegas