An accomplished representational painter and teacher 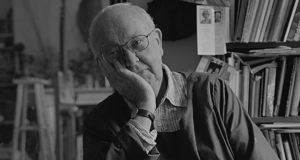 The artist John Coyle, who has died aged 88, was known as an accomplished representational painter who worked in a low-key, realist vein.

A quiet, modest man, he found his subject matter in and around his home and studio in Dún Laoghaire, where he lived with his family for many years. While his main interest and priority was always his own work, besides being a painter he was a teacher of note, heading the art department of Blackrock College, where he eventually became vice-principal.

His thoughtful, observant character and ease of manner earned the affection and respect of numerous pupils, among them artists Robert Ballagh and Fergus Martin, and designer Paul Costello. While he was a traditional figurative painter, eventually becoming a member of the Royal Hibernian Academy, he was entirely undogmatic and was open-minded and accommodating when it came to questions of artistic style.

He was born in Glasgow in 1928 to John and Anne Coyle. One of three siblings, he attended St Aloysius’ College, a Jesuit school.

The family moved to Ireland in 1946 and he went to study at the National College of Art and Design. By no means particularly rebellious, he found the conservative regime there quite stultifying. When the imposing Seán Keating noticed him carrying a book on Cezanne one day he took him to task: “You’re in one camp or the other, and if you’re in the other camp there’s no room for you here.”

By contrast, Paris, where he went on to study, “was paradise itself”, despite the cold and other privations. He spent time in the museums, painted industriously, and could very occasionally afford to eat at Café La Coupole, renowned for its artistic clientele. There one evening he encountered the writer Liam O’Flaherty, wearing a baseball cap and, for reasons he could not fathom, misleading the barman with an invented account of what had brought him to Paris.

Coyle travelled throughout Europe, spending time in Florence and Madrid. He had exhibited in Ireland as early as 1948, in Cork, and, back in Ireland, continued to exhibit as he began working as a teacher.

In his paintings of figures, interiors and urban landscapes, composition is carefully considered and classically poised, usually with a strong structural armature. He liked to heighten a generally even palette with a note of tonal or colour contrast, giving his work a certain visual bite. A natural craftsman, he was adept at a number of skills besides drawing and painting, including bookbinding and woodwork.

He enjoyed the company of the painter Charles Brady and many others who made up a substantial artistic community in the Dún Laoghaire area. He and Sheila Morrison married in 1961 and they had five children.

He is predeceased by Sheila, who died in 2014. He is survived by his children Valerie, Shane, Gary, Lisa and Claire, sons-in-law and daughters-in-law Greg, David, Gareth, Caron and Fiona, and grandchildren Fodhla, Fynn, Mollie, Sadhbh, Mahon, Seán and Eva.