All I Want for Christmas... the TV and radio presenter on Christmas memories and why Simon Harris is on the nice list 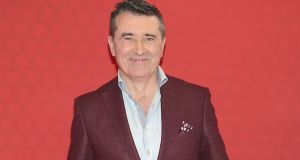 Martin King says he does not turn on the television on Christmas Day and enjoys the company and food instead.

When do festivities usually kick off in your household?

We used to be traditional, with decorations going up around December 8th, but in the last couple of years we have put them up at the end of November. I gave in to pressure from the kids.

We have two in the house but the main one is artificial. We have had it for 15 years, and it’s worse for wear, but I wouldn’t dare change it. I am literally tying branches together on it to keep it together.

When I was really small, my mum and dad put up the tree and suggested I step into the tree and look through the branches at all the lights and decorations. It was like stepping into a fairy forest, with its branches and twinkling lights. It’s completely mad, but it’s my favourite memory.

On Christmas Eve, once the kids go up to bed, my wife and I swap presents and do our Christmas. I love Christmas Eve. In the morning, we’re up with the kids opening the presents. I will prepare a late breakfast, and if we haven’t been to church the day before we will head up on Christmas morning. Then we will have guests and start making Christmas dinner. The weird thing is that we never switch on the TV. We enjoy the company, the food and the day instead.

Subbuteo, the football game where you flick to kick, when I was around nine. It entertained me for hours. I bought it for my boys, and they played it for a few minutes but then went back to their PlayStations.

Most irritating thing about Christmas?

People who don’t see the joy in it and just think it is a whole commercial scam. I know that people often overspend, but the money isn’t paramount. It is about getting together with your family, whatever shape that family takes.

Who’s on your naughty and nice list this year?

I’d send a bag of ashes to Mr Trump. I could be here until next Christmas explaining the reasons. Simon Harris, the former minister for health, deserves something special from Santa because of the work and the hours he put in.