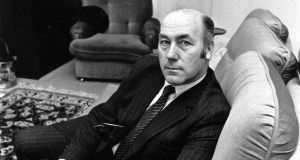 After politics, Dr Martin O’Donoghue returned to academia at Trinity and worked extensively on projects with the United Nations and the World Bank until his retirement in 1995. Photograph: Peter Thursfield

Prof Martin O’Donoghue, one of Ireland’s most significant but controversial politicians of recent times, has died in his native Dublin, aged 85.

From Crumlin’s Raymond Street, as a boy he devoured the philosophical works of Plato and Aristotle. Despite this academic bent, he left school early on the death of his father. While working as a waiter, he evaded Archbishop John Charles McQuaid’s ban on Catholics attending Trinity College by becoming a mature student and taking a first-class PhD in economics.

After a spell teaching in Magee College, Derry, he returned to Dublin as a Trinity fellow in 1969 and was promoted associate professor of economics in 1970, while forging political links as a consultant at the Departments of Education and Finance.

Between 1970 and 1973 O’Donoghue was economic adviser to taoiseach Jack Lynch, whom he helped negotiate Ireland’s EEC entry.

After a Fine Gael-Labour coalition under Liam Cosgrave won power in February 1973 – and quickly ran into difficulties on account of the Arab oil embargo – O’Donoghue devised the giveaway budget that swept Lynch back to power in June 1977 with a record 20-seat majority. Among the new deputies in Dún Laoghaire-Rathdown was O’Donoghue, who was appointed minister for economic planning and development on his first day as a TD.

Lynch appointed a cabinet sub-committee under his chairmanship composed of Colley, O’Donoghue and O’Malley to take “the most important economic decisions and present the rest of the cabinet with a fait accompli”. Thus Charles Haughey was marginalised as minister of health, a stratagem which did not stop him having fiery rows with O’Donoghue, especially over commitments to consultants.

In Disillusioned Decades. Ireland 1966-87, Tim Pat Coogan contended that O’Donoghue’s “shopping bag”, which included abolishing rates, was unnecessary as the economy was improving.

There was a buzz in Brussels on July 18th 1977, the day which marked the debut of Colley and O’Donoghue at a council of finance ministers: this twosome struck British and continental journalists as extravagant for a small country.

This began a process lasting until an EEC summit in Brussels when Lynch cited figures of a deal to help Ireland adjust to tighter spending controls which he had rejected. Political correspondents who had travelled from Dublin with the taoiseach got these figures wrong and an Irish Times editorial next day lambasted Lynch, leaving O’Donoghue with no choice but to insist that Lynch’s figures were correct.

In the event, Garret FitzGerald, in his autobiography, All in a Life, claimed he persuaded French president Giscard d’Estaing and German chancellor Helmut Schmidt to top up the EEC offer, which rescued Lynch, Colley and O’Donoghue from national opprobrium.

Overall, if the 1977 manifesto remains a blackmark on O’Donoghue’s reputation as an economics guru, his greatest legacy was to persuade Lynch to join the European Monetary System (EMS), thus breaking Ireland’s 150-year link with sterling and aligning the punt with the German mark, a decision with repercussions today, as Brexit looms.

In 1979, Lynch’s decision to retire was encouraged by O’Donoghue to enable Colley to succeed as taoiseach. When this backfired, Haughey sacked O’Donoghue and abolished the office of economic planning.

Thereafter, O’Donoghue was allied with O’Malley in unsuccessful challenges to Haughey’s leadership between 1981-82 which resulted in their resigning from cabinet.

In February 1982, O’Donoghue returned to government as minister for education, but resigned in October, refusing to support Haughey. In November he lost his Dáil seat. However, O’Donoghue entered Seanad Éireann, heading the administrative panel, and remained there until 1987. Later he left Fianna Fáil and joined O’Malley’s Progressive Democrats.

He returned to academia at Trinity and worked extensively on projects with the United Nations and the World Bank until his retirement in 1995. From 1998 to 2008, he served as a director of the Central Bank.

One point of controversy in his life was in 1983, when the incoming coalition disclosed that in the previous October, O’Donoghue had met Ray MacSharry and tried to persuade him to abandon support for Charles Haughey, a conversation the Sligoman had bugged with equipment supplied by minister for justice Seán Doherty.

A religious dimension behind O’Donoghue’s public life was revealed at his Requiem Mass in the Church of St Paul of the Cross, Mount Argus. Thanking a large congregation for their attendance, led by President Michael D Higgins, and which included former PDs O’Malley and Geraldine Kennedy, as well as former Fianna Fáil ministers Mary Hanafin and Michael Woods, his son Raphael spoke of how, while abroad in Muslim-dominated countries, he always found a church “regardless of the challenge or location to express his deep religious faith”.

Chief celebrant Fr Richard Sherry described O’Donoghue’s spirituality as “self-effacing”, while parish priest of Holy Cross in Belfast’s Ardoyne, Fr Eugene McCarthy, recalled that as a young man O’Donoghue was a member of a Legion of Mary praesidium which met at Mount Argus.

With a photograph of O’Donoghue in monastic mood over his coffin, Rafael concluded with a prayer which evoked the Elected Silence of Trappist monk-hermit Thomas Merton: “Be silent. Be still.”

He is survived by his wife Evelyn, children Audrey, Raphael and Tressan, and brother Tom.

Covid-19 summer: It hit me hard when I realised the holiday wasn’t going to happen
6