Will we soon be able to charge electric cars in just a minute? 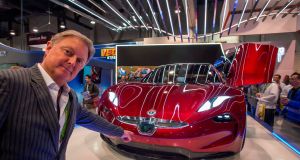 Henrik Fisker at CES in Las Vegas, says the solid-state batteries have the potential to be much cheaper to make than lithium-ion batteries.

In an announcement designed, surely, to take some of the wind from Tesla’s sails, Henrik Fisker is claiming to have made a dramatic breakthrough in battery technology.

Fisker, who left a job as chief of design at Aston Martin to set up his own eponymous car company, says that he’s filed patents on a new design of so-called “solid state” batteries, which can theoretically be charged far faster, and have greater energy capacity than the current state-of-the-art lithium-ion batteries.

So, with giants such as Toyota and Volkswagen pursuing the same goal, how has a small, startup car maker managed to make such a breakthrough? “Everyone has gone down a road of working on what we call thin-film sheet batteries” Fisker told The Irish Times. “One of the early scientists who worked on these was Dr Fabio Albano. ”

Albano used to work with a company called Sakti3, which seemed to have taken a lead in battery development, and had been bought, but then dropped, by British vacuum cleaner maker, and burgeoning car builder, Dyson (Dyson, having announced its intention to build an electric car of its own design, and having put its faith in solid-state battery designs by Sakti3, has this week just parted company with Ann Marie Sastry, co-founder of Sakti3 and a renowned expert in solid-state batteries).

Having left Sakti3, Albano decided to bring his next development to Fisker. “So, the surface area of a thin-film battery is not enough for it to generate the power for a car” says Fisker. “The breakthrough that Fabio brought to me, just over a year ago, was a development of the solid-state battery, and he said that he wanted to bring this battery into Fisker, and he really wanted to get it into a vehicle. He believed that he was close to a breakthrough.”

Albano’s design is, in its details, still under wraps. The broad-stroke picture though is a battery with what is being called a 3D electrode design, capable of holding 2.5-times the energy and charge of a conventional lithium-ion battery, and able to draw in a charge at a much faster rate, rather like a supercapacitor.

“This breakthrough marks the beginning of a new era in solid-state materials and manufacturing technologies,” said Dr Albano. “We are addressing all of the hurdles that solid-state batteries have encountered on the path to commercialisation, such as performance in cold temperatures; the use of low cost and scalable manufacturing methods; and the ability to form bulk solid-state electrodes with significant thickness and high active material loadings. We are excited to build on this foundation and move the needle in energy storage.”

The real kicker, according to Fisker, is that these solid-state batteries have the potential to be much cheaper to make than lithium-ion batteries, at least if projections on material costs can be realised. “Other batteries have claimed different things, but they’re all expensive. The unique thing about our battery” Fisker told The Irish Times, “is that the solvent that we use to build the battery is the cheapest one you can get – water. That makes this battery extremely cheap and easy to produce, it doesn’t need to be built in a ‘clean room,’ and you can produce football-fields of it very quickly. We estimate that it will be a third of the price of a lithium-ion battery by 2020.”

Fisker is not, as Mr Fisker himself points out, a battery maker, but he is already working with the likes of LG Chem and other battery-producing giants on his forthcoming Fisker E-Motion electric car, unveiled at this week’s Consumer Electronics Show in Las Vegas. Touting a 650km one-charge range and around the same size as a BMW 5 Series, the eMotion is packing a 780hp powertrain, using a lithium-ion battery pack.

It uses multiple electric motors for four-wheel drive, and Fisker claims that, by using complex ‘LiDar’ sensors, it will be the first truly Level Four hands-off autonomous car on the market.

That’s quite some claim, considering that even Volvo (usually considered to be further along than most car makers) recently backed off from a plan to put Level Four cars into beta testing with selected Swedish families.

According to Fisker, though. the eMotion “comes equipped with our advanced autonomous driving system with the ability to conquer everything from start and stop traffic to sailing in the fast lane. The eMotion’s autonomous system is composed of multiple LIDAR sensors throughout the body, ultrasonic sensors and cameras with the capability of reacting quickly through the short-range and long range radar. Finally, a car where you can truly sit back, relax and enjoy the ride.”

The whole of the eMotion’s structure is made from carbon-fibre, the lightness of which doubtless helps with the car’s lanky claimed range figure. All four doors open up and out on unique ‘butterfly’ hinges and can be controlled from a smartphone app.

The cabin features a series of enormous touchscreens for the instruments and infotainment, and Fisker is aiming at the chauffeur drive market with the option of a 27-inch, curved screen for the rear seats. Those alloy wheels, also available in carbon-fibre, are a whopping 24-inches in diameter by the way. Better keep away from kerbs.

Prices? Well, Fisker has to actually, physically get it on sale first, something that even Tesla, with all its resources and investment, has still struggled to do with its Model 3. A price of USD$129,000 has been spoken of at CES, which would probably translate to around €150,000 landed in Ireland, with sales projected to start from mid-2019.

Fisker is also working on a new wireless inductive charging system, because as he puts it himself “to get that kind of long-range charge into the battery in one minute, you would need a copper cable that would be the thickness of an elephant’s leg. No-one would be able to use it”. So instead, you just position the car over a pad mounted in the ground. You just park over it, it rises a little to match with a pad under the car, and you and take your one-minute charge. Fisker sees existing petrol stations as being the ideal locations for these ultra-fast wireless chargers. “We’re going to 800-volts, so now you need much bigger cables. So we’ve developed this in-ground pad system, which you don’t even need to be super-precise with parking over. It’s even better than filling your car with gas, because you won’t even need to get out of the car. Even the payments are wireless. So we’re also talking to some big infrastructure groups, and oil companies about using their locations. They already have strategic locations so it makes sense, and it’s an obvious thing for a gas station owner to replace the loss of oil-based sales by selling electricity.”

Clearly, one has to take such far-reaching claims and tales of ultra-fast charging with a major pinch of sceptical salt. The world’s largest car makers are all chasing the same tech, and their research and development budgets would dwarf Fisker’s many times over. But the man himself says that the biggest changes often come from just one person.

“It may sound amazing,” said Fisker, “but at the end of the day, most inventions come down to one incredible person having an incredible idea. I have never heard of inventions that come from teams of 1,000 people. They may be good at executing or manufacturing, but not at inventions. So inventions come from a single person. And it’s not just that we want to use the battery for ourselves, we want other car makers to use it, so that we can reach high-volume manufacturing goals.”

That high volume includes, potentially, a mass-market car for Fisker, or at least one that’s pitched at a more affordable price point than the luxury E-Motion, and he wants to team up with an existing major car maker to build it. “We want electric vehicles to become mass-market. We are already planning a mass-market car. Until we get this technology, I don’t see the world going totally electric, because no-one wants to sit there for half an hour charging their car. Or they’re going to forget to charge the car, and they’re going to be late for a meeting or something. But there’s one area where you just can’t beat the big car makers, and that’s mass-manufacturing, and you can kind of see that with another electric car maker. So people underestimate how complicated a car is to make, and the big car companies are these big, well-oiled machines for making cars. That’s very hard to replicate for a startup. So we are looking at, we don’t want to do that buy ourselves, and I believe that it’s the right time to collaborate in the electric car market, because we all need to build up the volume, because that’s the only way to bring the prices down.”