Honest John has special deals just for you 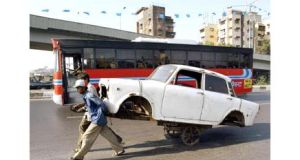 Emissions/Kilian Doyle: Here Mick, chuck us over another slab of turkey there, will ye? Bleedin' ravenous, so I am, I'd ate de hind leg off de dove of peace if it flew in de winda.

Wha'? Me diet? What's de poin'? Sure won't we be eatin' de whole bleedin' fatted calf once dem SSIAs start payin' out in a few months?

We'll be rollin' in it, you an' me. I'll be floggin' dozens of new cars to stupah gobdaws an' ye'll be churnin' out dere old ones to the rest of de punters after de second-hans.

An extra 10 per cent mark up? Course I will. About time we made a few quid, wha'? It's a hard life shiftin' motors dese days. Tis gone mental. De public all tink dey're a cross between dat poxbottle Eddie Hobbs and dat big fuzzy-headed Sasanach eejit Jeremy Clarkson. I'm tellin' ye, gone mad as a flippin' sack of ham sangers, so it is.

Calm down? I willinmehole calm down. Dat bleedin' bunch of hoors in Prime Time could have ruined it for us.

Already dere's people coming in tinkin' we're all robbers, crying dat dey're bein' ripped off if I don't give dem dere car for half of wha' I paid for it. Sure don't dey know I only make one per cent profit on every new car I sell now? We're bein' fleeced to de bone, so we are.

An' dey tink we're dere out of de goodness of our hearts an' we've nuttin' better to bedoin' dan servin' dem. Nobody appreciates us Mick, all de hard work we do an' the sacrifices we have te be makin' to meet deir needs.

D'ye remember dose two blokes I tol' ye abou' who came in last February? De lads who wanted me to ring up Mister Porsche to get him to make a Boxster wit' pink metallic paint an' pink ledder upholstery? Yeh, I reckon so too.

Dey were on de blower every day for de next six months wantin' to know where dere bleedin' car was an' accusing me of runnin' off wit' dere cash. I told dem dey must've forgotten when I rang dem up an' told dem we were relocating operations to Spain for a few monts. Course I have de money, I said, it' s just restin' in me bank account in Nigeria until Mr Porsche rings back. Feck' s sake, some people. Had to send me three sons around to "reassure" dem dat goin' to de garda shickoloni wasn't dere best option.

Jaysus, some blaggard even came in the udder day, accusin' me of clocking one of me motors. He was ranting an' whinin' like an aul one with her tights caught in lift door til I got it through his tick bleedin' skull dat de flippin' car was bran' new, which is why dere was only 23 kilometres on de clock. De gobshite.

I sent him over to you, so I did. Yeah, a tall fella wit' a green jumper. A real knowitall. Ye sold him wha'? Dat auld Merc dat you lopped 25,000 miles off the clock? De one wit' no chassis an' de bungee cords holdin' de engine together? Arra, yer some boy, Mick. No bleedin' flies on you, is dere?

Still, it must be tough for ye too. Bet ye have every toolbox dis side of Portlaoise comin' inta ye looking for a thurty grand trade in on dere 1990 Beemer cos dere brother in law who's a mechanic reckons dey're collector's items after dat clown in de Times made dem famous. Tellin' ye, I'd burst dat Doyle gobshite if I ever met 'im, de smug little toad.

I know, bud, I know. 'Tis shockin' de way we're underappreciated. Still, we'll be getting our reward in de next life, you an' me, don't you worry.

Here, can you reach into dat bucket of champagne? No, de udder bucket. Me bleedin' Rolex has fallen in again. Poxy yoke. Good job I've a drawer full of dem at the ranch, eh?