An engaging and insightful new book celebrates the Irish building designs of McCullough Mulvin Architects. The Spanish publishers joined the design team on a roadtrip around Ireland to visit and chronicle their signature works 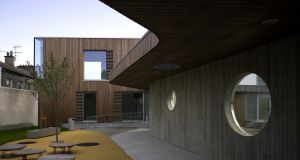 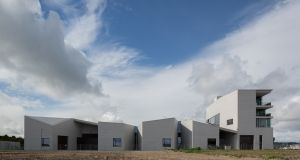 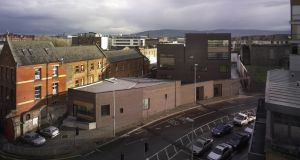 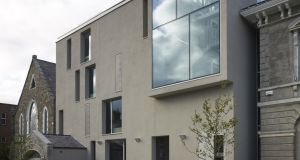 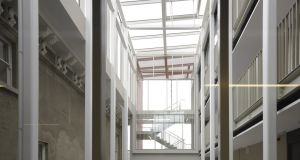 Inside Blackrock Institute of Further Education 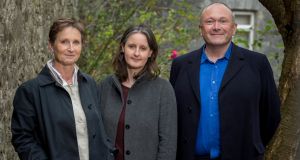 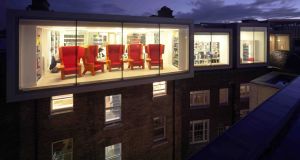 What makes cities look the way they do? Most people take them for granted, get stuck in traffic, admire the edifices, use the offices and dream of bigger apartments. But, for Niall McCullough, the city is a study. Going right back, Dublin is based on the particular confluence of river and harbour, the shape of hills, and the historic routes into the city such as the Sli Dala, now Cork Street.

Reading McCullough’s Dublin an Urban History, time comes alive with stories of gardens and orchards running down to the river from the great houses on Dame Street, pitched battles between the weavers of The Coombe with the butchers on the quays, and secret churches from difficult times – their function hidden from everyday view.

Through his eyes, the city is thick with layers of the lives of people, trade, survival, ritual and expansion, and it is revealed through the fabric of the buildings left behind. Together, McCullough, Valerie Mulvin and Ruth O’Herlihy, are the co-partners of McCullough Mulvin Architects, and their work has just been celebrated with the publication of a major monograph by Spanish publishing house, Cuadernos.

It’s a significant honour for a practice that has deliberately opted to stay in the small-to-medium-sized bracket and yet whose buildings – including the Waterford City Library, the Temple Bar Gallery, Sligo Courthouse and projects at Trinity College, UCD and UCC, as well as private houses dotted around the country – have come to be an integral part of the fabric of Irish life.

“It was very interesting, to have someone coming in from the outside, putting a spotlight on us,” says McCullough. “It made us think about what we do. I mean, you’re always trying to make things in a particular place, but it has to have a universal view, and mean something to people from everywhere.”

The team from Cuadernos came to Ireland and embarked on a road trip with McCullough, Mulvin and O’Herlihy, to rediscover their projects.

“They were energetic,” McCullough recalls. “Like conquistadores, relentless, but in a good way. There’s a much stronger architectural culture in Spain than we have here.”

Talking with McCullough, who is not without energy and enthusiasm himself, is one of those expanding experiences, enabling you to make connections and see things in a new way. In the book, excerpts of conversations between the Cuadernos team and the Irish architects reveal ideas and discoveries.

Despite the increasing international successes of Irish practices, including Grafton and O’Donnell + Tuomey, and a growing energy in emerging practices thanks to excellent work by the Irish Architecture Foundation, the RIAI and SAUL at the University of Limerick, the underlying culture in Ireland has never favoured architecture. This, McCullough tells his Spanish colleagues, is because, historically, our material culture belonged to another country. “So they invested in things that have no weight, like music and literature.”

“Things that you can carry with you and cannot be destroyed,” adds Mulvin.

According to McCullough, both Ireland and Spain came to Modernism late – Spain because of Franco, and Ireland coming out of a “post-colonial sloth” – and both looked to it to solve things. “Build this and it will change everything, had been the thinking.” It’s a limited philosophy in opposition to McCullough Mulvin’s work, which, although they also excel at new-build projects in green field sites (such as the innovative Beaufort Maritime and Energy Research Laboratory at Ringaskiddy, Co Cork), comes into its own when layering histories, not denying or obliterating the past, but adding to it, as with Rush Library, their gorgeously sensitive reimagining of a former church.

Fuelled by Spanish wine, Guinness and the running joke of a quest to discover the imaginary Lake Isle of Innishfree, it was some road trip. “We went to every one of our buildings in Ireland. In the end, the car gave up, just outside Galway, ” McCullough says. “We made a map of where we’d gone, which had its own kind of psychogeography.” The resulting book is a thick and glossy publication, with essays, plans and drawings, along with maps and photographs that reveal an Ireland in which old stone buildings have light- filled additions, clean lines meeting decorative stonework, and new-build projects that create potential for centuries to come.

So if McCullough could pick his perfect project, would it be a green-field site with a blank chequebook or an old, historic building needing a new future? He pauses. It’s an unfair question, as I know he is imagining ideas, solutions, plans and potentials for both. “Honestly? It depends what needs to be done,” he says, before agreeing that it’s delving into history, thinking of sympathetic and interesting materials, and again that layering of time and meaning that gives “the frisson”.

Although McCullough Mulvin work abroad, a current project being a new university building in Punjab, India, the new book focuses solely on their Irish work. So what else emerged through the process of seeing Ireland through Spanish eyes? “Things which are obsessional: our climate, it’s beautiful and particular. I don’t think we have buildings that are reflective of it, using the beauty of the way moss grows, or making big external covered spaces as it’s warm but wet.

“There’s also ongoing interest in how you deal with history, in realising the stories you have heard are not true, but just versions of things. The facts of history are queasy things, and how you deal with that in contemporary architecture is very interesting.”

History for the future

McCullough paints a picture with words, speaking of history he can smell, the echoes of what has been lost with development, the richness of architecture, the opportunities for the future, and the potential of materials.

“This kind of work is huge in Europe, ” he says. “Less so in the UK: it’s harder in Britain, as there’s such a belief there that the past was successful, so why change it? Still,” he concedes, “we’re talking about the 5 per cent [of building] everywhere, and that’s probably they way it’s going to be.”

If the main audience for the book is other architects, it’s also a brilliant record of the thinking behind some of our best, most exciting and sensitively imaginative buildings today.

Model Arts Centre Sligo: original re-imagining of a former school on The Mall.

McCullough Mulvin: Arquitectura 2004-2015, published by Cuadernos, is available from RIAI Bookshop at €45.

Pontifacts: All the papal questions you never thought to ask
7