Garden designers Paul Martin and Diarmuid Gavin made sure the Irish were again among the medals at Britain’s leading flower show, but with very different contributions 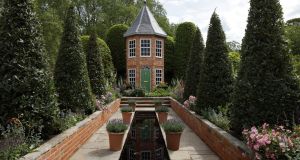 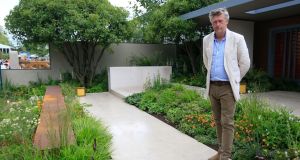 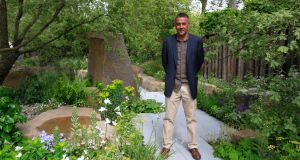 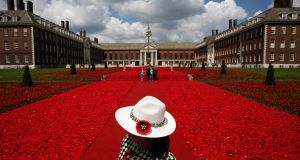 A volunteer stands at the entrance of the 5,000 Poppies Garden at the Chelsea Flower Show in London. Photo: Getty Images

By now you’ll almost certainly know that the grand old lady of international horticulture that is the RHS Chelsea Flower Show once again waved her magic wand over the historic showgrounds of the Chelsea Royal Hospital in London this week, bestowing medals on two of our best-known Irish garden designers in the process (gold for Paul Martin and silver-gilt for Diarmuid Gavin).

Intriguingly, the two Irishmen’s main-avenue show gardens couldn’t be more different. Martin’s Garden of Mindful Living, sponsored by Vestra Wealth, is a tranquil, sophisticated space that accommodates the horticultural challenges of a shady site as well as the looming profile of Chelsea’s famous Great Pavilion.

Opinions on this garden are divided: some feel that the designer has crossed the line into pure kitsch, but others love it for its kooky, unapologetically populist appeal. Gavin says he was inspired by the idiosyncratic British illustrator Heath Robinson as well as by the designer Rowland Emett’s work on the classic children’s movie Chitty Chitty Bang Bang.

Irish garden designers aside, the highlights of this year’s Chelsea Flower Show include the work of two seasoned British garden designers. It was a neck-and-neck race between Andy Sturgeon, a multiple gold medal winner at Chelsea, and Cleve West, another highly acclaimed Chelsea annual, as to who would claim the much-coveted best-in-show award.

In the end, Sturgeon pipped West to the post with his wonderfully polished, modernist take on a sun-bleached, stony Spanish riverbed, in which he uses a confident mixture of boulders (boulders were everwhere at Chelsea this year, surely a legacy of last year’s winner, Dan Pearson) alongside bronze-coated, sculptural steel “fins”, and long, jutting sections of limestone to give his design a pleasing heft and angularity. The planting is restrained and silvery in hue, with lots of spiky, thorny specimens.

West, meanwhile, proved his craftsmanship with a design that combines artful hard landscaping with exquisite planting to create a garden exceptionally rich in atmosphere. “Contrived woodland” is how he describes it, but if only all contrived woodlands were like this one.

Away from Chelsea’s main avenue, the smaller gardens that shine out include one in the “Fresh” category with a dreadfully clunky title, The Marble and Granite Centre: Antithesis of Sarcophagi, which has been brilliantly executed by its designers, Martin Cook and Gary Breeze.

It consists of an austere 44-tonne granite cube that at first glance seems utterly antagonistic to the concept of any garden. But six tiny peepholes drilled through its stone shell allow visitors to experience the completely unexpected: a hidden, secret woodland contained within, where a leafy huddle of birch and foxgloves grow cheek by jowl. Utterly brilliant. I just wish we could see much more of this kind of work in public spaces.

Meanwhile, The Garden of Potential, by young British designer and plant hunter Propagating Dan (also in the Fresh category), offers ample proof of how satisfying a foliage garden can be, as well as of how a passion for plants can take your life in entirely unexpected directions.

Also in the Fresh category, Claudy Jongstra and Stefan Jaspers’s Honeysuckle Blues Garden is a reminder of the usefulness of plants. In this case, the garden showcases the many different species valued for their usefulness as dyes. Woad, pot marigolds, irises and onions are just some of the plants that feature, as well as madder, or Rubia tintorum, the plant whose root gives a ruby-red pigment that allowed the famous Dutch artist Vermeer to paint Girl with a Red Hat.

Finally, a special mention for Chelsea’s floral displays. Who couldn’t but be seduced by the swags of roses and clematis and other seasonal blooms that adorn the main entrances in honour of Queen Elizabeth’s 90th birthday? (The London Gate entrance is the work of floral artist Flora Starkey, while the Bull Ring Gate arch is the work of floral designer Shane Connolly.)

Chelsea’s Great Pavilion is similarly rich in floral tributes, including a giant, floral profile of her majesty.

But the greatest bit of floral theatre at this year’s show has to be the newly revealed view of the Royal Hospital itself, its green lawns covered in a carpet of 300,000 crocheted scarlet poppies as part of an installation (below) by Australian designer Phillip Johnson.