A Caravaggio for sale 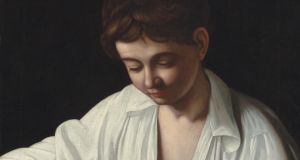 Detail from ‘Boy Peeling A Fruit’: the fruit is believed to be a green (unripe) Seville or bergamot orange but has long been a subject of debate among art historians

Almost all the surviving paintings by the Italian artist Caravaggio (1571-1610) are in museums, national galleries or churches in Italy. They are regarded as among the world’s most important art, considered priceless, and will never be sold.

They include The Taking of Christ at the National Gallery of Ireland; Bacchus in the Uffizi, Florence; Musicians in the Metropolitan Museum, New York and Lute Player in the Hermitage, St. Petersburg.

A handful remain in private ownership including Boy Peeling A Fruit – which is going to auction at Christie’s, New York on Wednesday (January 28th) with a top estimate of $5 million (€4.3 million) – although it could sell for much more.

The fruit being peeled is a mystery – and has long been the subject of debate among art historians – but is believed to be a green (unripe) Seville or bergamot orange. Although it is Caravaggio’s earliest known painting, the modest estimate is explained by the survival of a number of versions including one in the British Royal Collection. In a catalogue note, Christie’s say that while the painting’s “autograph status has been questioned by some over the past several decades, many scholars support the attribution to Caravaggio”. Previous owners included the artist Sir Joshua Reynolds and the Anglo-Irish aristocrat, Murrough O’Brien, 5th Earl of Inchiquin.