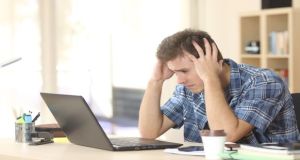 Richie Sadlier asks "them at the outset what they’d most like to achieve". File photograph: Getty Images

‘What’s this topic all about?” I asked a classroom of Transition Year students. I was there to speak about mental health and I was curious to hear their thoughts. I figured it would be useful to know their views before I launched into talking about anything.

It’s mainly about suicide and depression, they said. “So why do ye think I’m here?” I followed up. “Why is a subject like this in your timetable now?”

“You’re here to stop us killing ourselves.”

It was the most memorable answer of the many they gave, but it was consistent with most of the others. The general perception was that discussing this topic involved disclosures of problems and failings. They figured my job was to root out the mentally ill. They presumed it would be all about mental disorders, self-harm and suicide. All the really negative stuff.

Three years ago, I went back to my old school, St Benildus College in Kilmacud, offering myself for any mental health-related work they thought might be classroom-appropriate. I was practising psychotherapy and was drawn to the area of adolescence.

I began with a 90-minute talk with each of the five Transition Year groups. Within a year, it evolved into a six-week module which I deliver every Friday morning. Quite apart from anything the students get from it, it’s one of the high points of my own working week.

But lads wouldn’t be into a topic like this, surely? There’s no way 16-year-olds would pay attention to that? This is what I hear when I speak about the module, but the opposite is the case. It’s really not hard to get teenagers to be interested in themselves.

I ask them at the outset what they’d most like to achieve. Some want to feel more confident and be less awkward. Others would love to be less self-conscious and more comfortable speaking to girls. And also to adults. Some want to have better control of their temper. They’d like to be able to make a mistake in a match and know how to put it behind them. Others want to be less affected by slagging or criticism and to handle their parents better. And some just want to be happier.

They never say this, but they want to know they’re not alone in thinking the way they do about themselves and their place in the world. That others are going through something similar. Ultimately, they’re looking for support and guidance at a time when it’s badly needed.

Occasionally a student will begin seeing a guidance counsellor having learned it’s perfectly acceptable to do so. Sometimes I begin working with one of the lads and their parents in my own practice. Rarely, but it does happen, there’s an in-class disclosure of something that needs to be referred to a social worker. In all such cases, though, the students receive the support they require all along.

There are many schools that are just as proactive when it comes to students’ wellbeing. They know the benefits of early intervention in an area as rich as this. There are still many, however, who don’t.

The day before I was due to go into a particular school two years ago, I got a call from a teacher apologetically pulling the plug. I had been invited to speak to the sixth-year students on the general topic of mental health. The teacher figured they would benefit from knowing how to reduce levels of anxiety and stress.

However, the principal had a look at the material I planned to cover and he was having none of it. Apparently he didn’t want things to “descend into a f***ing counselling session”. Three months shy of their Leaving Cert, he figured the last thing they needed was me coming in to rock the boat.

Mental health is about a lot more than depression and suicide, particularly among adolescents.

You’d think a conversation that promotes self-care and help-seeking behaviours is exactly what lads in their position needed. That wasn’t his view, though. They were big enough now and should be able to handle the pressure.

Mental health is about a lot more than depression and suicide, particularly among adolescents. That may be the focus it gets in much of the national media, but in a classroom of teenagers it can be about so much more. When handled appropriately, it opens students’ minds to caring for their own wellbeing in ways that were traditionally seen as off-limits. And nobody should be in opposition to that.

Some schools don’t have the resources or the inclination to go near a topic like this, but the short- and long-term benefits are obvious to those that do. If teenage boys can embrace this subject the way they do in St Benildus, then school principals throughout the country have no excuse.

The new rules of house viewing: strict appointments, layers of cleaning, no time-wasters
8