As my little city slickers approach Mayo, they test my farm knowledge to the limits 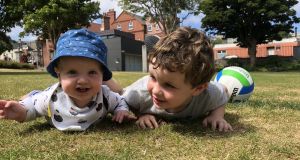 “Sure we just have to fling a few things into a bag and stick them in the car,” says relaxed Mammy the evening before her first cross-country road trip with two small children, as she justifies opting for a glass of wine and packing in the morning.

This is a different Mammy to the one who comes out a week before a flight abroad. That’s the super-organised Mammy with multiple lists, categorised and weighed bags, a midair poonami kit and packed lunches.

It turns out that while having no fixed departure time and (almost) all the space in the world sounds very chilled, it’s not.

Despite being woken up by the baby at 6am, it’s midday before, exhausted, we’ve finally rammed the car boot shut with the last of the bags and what feels like the contents of our house. The first-born is square-eyed from Peppa Pig (drafted in when it became apparent that getting a three-year-old to help you pack means spending more time searching for the things he has removed from the bag). The baby is red-eyed because he has been kept awake in advance of a giant nap in the car (we hope).

First-born has been counting down the days all week to his long-overdue trip west to Nanny and Grandad’s house. By the time we reach the M50, he has asked three times: “Is this Mayo?”

My carefully crafted cool playlists and podcasts of old have been replaced with songs such as Nelly the Elephant and Dr Seuss audiobooks. It finally sends them both to sleep, just before the internet disappears somewhere at the edge of the Pale. Then follows over an hour of downtime, like a day at the spa, really, but strapped inside a car hurtling down the motorway.

Soon comes the waking, and the all-day trolley service that is parenting resumes. So that’s how we end up in one of those places. Those edge-of-the-road places where the function of food is fuel, not pleasure. Places so devoid of character it would make you pontificate on what your world had become . . . if those places weren’t way too noisy for thinking.

But those places work for kids. They have the gourmet dishes my oldest willingly eats (goujons au poulet) and nobody even blinks if the baby drops food from his high chair. Most importantly there’s a play area nearby to burn off the built-up energy of a preschooler, for whom a car-seat is the equivalent of a “jack in the box” container.

Fed and watered and unwound, we’re off again. Once over the Shannon, the nose of my eldest wrinkles. “What’s that smell?” Growing up in the country, I don’t remember the first time I smelled slurry, it was just a part of life. I explain to my little city slicker what the fertiliser is made of, expecting the giggle I’d usually get by mentioning anything do with the toilet. Instead there’s stony silence and a look of disbelief as he quietly closes up his window.

The questions keep coming, pushing my knowledge of farms to its limit. We see Jerseys and Friesians. We talk about milking and shearing. And those teenage summers I spent cursing the bog as we harvested turf finally came in very useful as we passed through Mayo’s blanket bogs. The three-year-old even ran out of questions . . . Only about bogs, mind you.

The other questions continued. “And where are we now?,” he asks over and over. Tarmonbarry, Strokestown, Frenchpark, Swinford. these placenames will become etched in his memory as forming the long road to the Mayo homeland of his dad.

Eventually the baby runs out of sleep (and patience). My neck cracks with strain from turning around to wiggle his toy.

I spot in my rear-view mirror the preschooler stretching out his seatbelt. I line up my best giving-out face when I hear a cackle from the baby, like the sound of a dragon. His brother reaches over and makes the baby’s legs wiggle with glee the way nobody else in the world can.

We have stiff legs, tired eyes, unhappy palates, no internet signal and a bursting boot. But rattling down a back road in the middle of Mayo with the silhouette of Nephin mountain coming into view and a weekend of grandparent fun ahead, it feels like we are making childhood magic.

There’ll be many more family road trips, but next time I’ll pack early and definitely bring a picnic.