The history of food as beauty

From baths of milk to honey waxing, beauty and food share a long and illustrious history 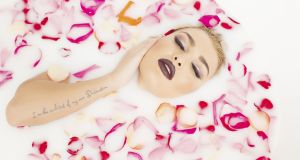 “You ok?” says my beautician, Debbie, as I grit my teeth in preparation for the next assault on my follicles. I’m getting my legs waxed, and it hurts. As I look up at the ceiling and take deep breaths, I wonder out loud to Debbie: ‘how long have we humans been subjecting ourselves to the self-inflicted agony of hair removal?’ She provides welcome distraction by telling me about the ancient Egyptians and their approach to hair removal, which Debbie says may have included body sugaring, a technique of hair removal using a paste made from sugar and lemons. Which gets me thinking about food and beauty.

In any cosmetics aisle and you’ll see bursts of food references, whether it’s by capturing the scent of citrus or harnessing the natural power of honey. How long have we been using food in the beauty department?

There is evidence that the ancient Egyptians were into getting rid of their hair, particularly the wealthier and more noble members of their civilisation. Wigs, complete with an early form of hair gel, have been found on mummies uncovered in Egyptian tombs, which seems to support the idea that Egyptians may have shaved their heads and wore fabulous wigs instead. It’s widely reported online that the ancient Egyptians invented the technique of sugaring, known as sukkar or halawa, as a way to remove hair on other parts of the body, though the Persians had a version too, known as moum, so it’s possible that this method could have travelled to Egypt from Iran. It’s a method that has been in use since around 1900BC, according to an article entitled Sugaring: An Ancient Method of Hair Removal by Dania Tannir MD and Barry Leshin MD in a 2001 Dermatologic Surgery Journal .

A paste was made using sugar or honey, lemons and water, to produce a sticky caramel-type substance that worked along the same principles of hair-removing wax. You can find plenty of recipes online to make your own homemade sugaring kit, though personally I would approach with caution. Though I would say that about anything and any technique that involves hair removal.

On the beauty website xovain.com, beauty writer Bella Williams has a series of articles trying out beauty tips from different eras including ancient Romans, Egyptians and the late Middle Ages, which make for an interesting read if you’re curious about the history of make-up and beauty. Williams mentions Cleopatra’s tendency to bathe in milk, a trend that travelled to ancient Rome. Roman author Pliny the Elder wrote how Nero’s wife Poppea believed bathing in milk “erases the facial wrinkles, makes the skin more delicate and maintains the whiteness.”

Got milk? Milk as a beauty enabler continued into the Middle Ages, where kitchen beauticians really seem to have come into their own, and curdled milk was used as a cure for acne. A Cosmopolitan article, describes how boiled nettles and porridge oats were used for a smooth complexion in the Middle Ages, as well as cucumber juice being used to eradicate freckles.

For a recent project with Irish all-natural skincare company Dublin Herbalists , I worked on writing descriptions of products to be used on their packaging labels. I had to test every product to make sure I understood their properties. To find out a little more about the connection between food and beauty, I contacted t founder and head herbalist Claire Gardiner. “Cucumbers won’t remove freckles but cucumber extract is used in under-eye creams as it’s supposed to lighten the pigment of our skin, and it’s used in toners because of its astringent qualities” she explains.

When it comes to food and beauty, the essential body acids are where it’s at, says Gardiner. These are your good fats, oils and nuts. Avocados, either in a salad or used as a face mask, are a great way to soften and lubricate your skin. Then there are the sweet almond oils, the shea and cocoa nut butters that we use to moisturise.

Online, you’ll find a heap of homemade beauty remedies using kitchen ingredients, such as olive oil as eye make-up remover or avocado and egg yolk as a hair mask. If you’re interested in this kind of beauty cooking, Neal’s Yard Beauty Book by Susan Curtis, published last year, might be the tome you’re looking for. Check it out on nealsyardremedies.com. Aoife McElwain

Still got chickpeas to use up? Try this crowdpleaser
Real news has value SUBSCRIBE