The best cheese in the world? It’s from Norway 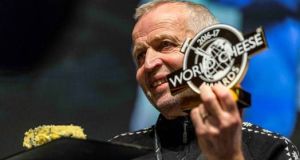 A farmhouse blue cheese from Norway called Kraftkar, made with pasteurised cow’s milk, was voted best cheese in the world by a panel of experts on Wednesday, beating off competition from more than 3,000 entries at the World Cheese Awards in San Sebastián, Spain.

On Thursday, the Norwegian cheese went up against all 28 previous winners of the title, and came out on top in the Champion of Champions judging, leading it to be described as “the best cheese ever made”.

The runner up was Ossau Iraty from Fromagerie Agour in France, and Le Gruyère AOP Premier Cru from Cremo SA von Mühlenen in Switzerland finished third in the Champion of Champions judging.

Two Spanish cheeses, Cala Blanc from Lacto Industrial Menorquina and Cremositos Del Zujar from Arteserena, finished joint runner-up in the 2016 world championship. The 12-months aged winning cheese from Norway scored 71 points out of a possible 80, ahead of the Spanish pair on 67.

“We are a family-run farm and work long days to make our cheese. We get up early every day and go to bed very late to make the best cheese we can, and so to win this award, I am very proud,” said winning cheesemaker Gunnar Waagen, who makes six cheeses that carry the Tingvollost name.

The World Cheese Awards are in their 29th year, and attracted entries from 31 countries, from Mexico to Mozambique. “Cheeses of all shapes and sizes made their way by bicycle, boat, plane, train, truck and car to the Kursaal Congress Centre in San Sebastián, via 12 consolidation points in all corners of the globe,” the organisers said.

Then 266 cheese experts from 26 countries tasted, smelled and graded the entries in a single day, giving bronze, silver, gold and super gold awards to worthy entries. The judges worked in teams of four, and each of the 66 teams nominated one exception cheese for super gold status.

These were then reassessed, in front of a trade and consumer audience, by a team of 16 Super Jury members, before the world champion was announced.

In 2001, Carbery Mature Cheddar was joint-supreme champion at these awards, sharing the top spot with a French camembert. This was the only time an Irish cheese won the World Cheese Awards supreme honour. There were Irish cheeses in competition in San Sebastián this week. The complete results will be released on Friday and will be available subsequently at the Guild of Fine Food website here

Looking for a new frock? Here's why you should rent, not buy
5

Vicky Phelan: ‘My motto for life is to live for the moment’
10