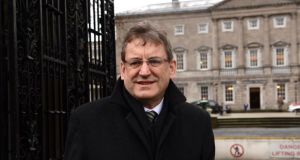 FSAI chief executive Alan Reilly: said food companies must have a threat assessment procedure in place to identify where the food supply chain could be vulnerable to fraud. Photograph: Cyril Byrne

Food fraud is still seen as an easy target for criminals and the authorities are not organised enough to tackle the criminals, the outgoing Food Safety Authority of Ireland (FSAI) chief executive Alan Reilly has said.

Prof Reilly said food companies must have a threat assessment procedure in place to identify where the food supply chain could be vulnerable to fraud.

“The longer that food chain, the more things that could go wrong and the more opportunities for criminals to get in and do things like food substitution and animal species substitution, to bulk out products, to dilute down high-value products like olive oil and so on,” he said.

“The food chain is still seen as an easy target for criminals. There is big money to be made in food fraud and at the present moment I don’t think we are organised enough to tackle some of the criminals out there. It does need co-operation across all the agencies of the State, gardaí, customers and the food regulators have to work together to tackle the problem.”

He said the authority was working with its European counterparts in a major clampdown on fraud involving fish and manuka honey.

Cod and Dover sole were at risk of fraud because they were expensive white fish and a cheaper white fish such as pangasius could be substituted for them.

“Once you take the head and skin off it’s very difficult to tell the difference, especially if it’s covered in a sauce. That was fundamental to why we did the study on the beef products, because we were aware that consumers couldn’t tell in a shepherd’s pie or a burger or a salami what type of beef was present,” said Prof Reilly.

“And it surprised us all to hear it was horse, and in some cases 100 per cent horse, in some of the lasagnes. ”

He said the industry was doing a lot of animal species tests since the horse meat crisis.

“They don’t want to be caught out again. The large retailers require laboratory testing for the authenticity of species,” he said.

However, last week the UK’s food standards agency reported that one in five samples of lamb takeaway meals were contaminated with other meat such as chicken, beef and pork.

“When it comes to imports into the European Union from third countries we do have to be very vigilant in looking at the safety and authenticity of foods and materials such as packaging and kitchen ware. ”

In recent days, Chris Elliott who led the British government’s inquiry into the horse meat scandal, expressed fears that cheap peanuts and almonds were being substituted for cumin seeds and said the implications for nut allergy sufferers were very serious. However, Prof Reilly said there was no evidence at this time to suggest nuts were being substituted for cumin in the food chain.

“From time to time, accidental cross-contamination can occur and if this happens the mislabelled products are recalled. The FSAI will work closely with its counterparts in the UK in the interest of protecting public health to ensure that the problem identified in the UK does not happen again,” he said.

Prepare for ‘new normal’ of paying subscriptions for optional extras
7

‘Moving to Galway was the best decision of my life’
8