The I:CO sorting plant in Germany goes to great lengths to stop clothes being thrown away 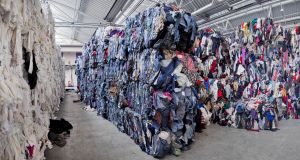 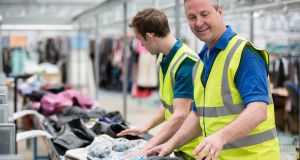 Each worker at the I:CO London factory sorts an average of 2,800kg of clothes a day

You know that bag of clothes sitting in the boot of your car? The one you’ve been meaning to drop off for recycling because they aren’t quite good enough for the charity shop? It’s worth the drop-off, because those clothes, once they’ve been deposited at clothes banks or in the special recycling bins at high-street checkouts, can have an entirely new life – one you’ve probably never even thought about.

Approximately 80 billion tons of new clothes are sold every year across the planet – 400 per cent more than only 40 years ago. It’s no secret that we live in a throwaway culture where clothes are cheap, trends come and go with alarming speed and we view garments as being almost disposable. Wardrobes are bursting with clothes people don’t want and don’t need, while shopping continues unabated.

What this means is a lot of rubbish. All those clothes have to go somewhere but just because you no longer want them doesn’t mean they are waste. One company finding new uses for old clothes is

I:CO (short for I collect), a Swiss/German textile recycling company that takes in unwanted clothes and repurposes them for use elsewhere.

On arrival at I:CO just outside of Berlin I hear it referred to as a sorting plant – for the soon-to-be obvious reason that every item of clothing that arrives is sorted multiple times. The clothes come from recycling collection stations in stores such as H&M, Levi’s, Puma, North Face, Intimissi and Timberland and they are then divided into piles with labels such as “black denim shorts” and “polyester leopard-print knickers”. It’s that detailed.

Of the clothing collected in I:CO, 60 per cent goes back on to the market to be reworn. These are sold by the kilo mostly to Africa and eastern Europe, but they also end up in vintage shops such as I:CO’s own “Pick and Wait” in Germany.

The sorters are trained to spot the high-end, fashionable items that will sell in vintage shops. There are women’s magazines dotted around the factory floor to help the workers research, and I spot a beautiful, thick shearling coat in one of the bins marked “prime”.

All of the sorting is done by hand. Each worker at the I:CO factory sorts an average of 2,800kg a day and watching their hands moving through the piles of clothes you can believe it. The plant is 13 football fields in size.

The occasional non-clothing item is removed too. I spot a Christmas tree and a fetching Marilyn Monroe weighing scales at one of the sorting benches. The 40 per cent of clothing that cannot be reworn is broken down for industrial use, going on to become a whole range of products including insulation and car seat stuffing. Nothing goes to landfill, even the dust is collected and sent to paper factories to be made into paper products.

Jana Wilkens, account manager at I:CO, tells us that the company believes retailers who put clothes out on to the market have a responsibility to prevent them from ending up in landfill.

One of the biggest contributors of clothes to I:CO is H&M. In every H&M store there is a recycling drop-off point for unwanted clothes and in exchange for leaving their goods, customers receive H&M vouchers.

Considering that H&M is one of the biggest providers of cheap clothes in the world and that it is a large contributor to the problem of excess waste in the first place, is this commitment to recycling really enough?

Caterina Midby, H&M’s sustainability manager for Ireland and the UK, says that “H&M has the goal of a 100 per cent circular business model. One where waste is used as a resource”. The company report to be moving toward this goal by investing in new technologies and fabrics that are easily reusable. As things stand, only 1 per cent of the collected clothes that arrive in I:CO plants are recycled into new fibres for new clothes; so the circle is far from complete.

Plants like I:CO are a step in the right direction. 100 per cent of the clothes that arrive into these plants avoid landfill. But to see real change, it’s our consumption habits that need to change.

The environmentally damaging fast fashion business model is fed only by our insatiable need for cheap and fast clothes. Companies are providing what we continue to buy.

Covid-19 Level 5 support bubbles: Everything you need to know
2

Michael Harding: The tree that broke my heart will be born again
9