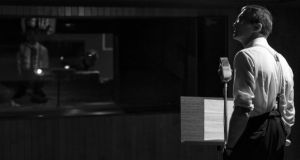 Ostensibly, Pat Collins’s film Song of Granite appears to explore the life of Joe Heaney, the sean-nós singer credited with converting the Irish musical style to an art form and his influence in spreading knowledge of its tradition far beyond the private boundaries of the west of Ireland singing house.

However, Collins’s layered exploration of the Connemara-born singer’s travels to Britain and later North America, goes far beyond biography, inadvertently revealing features of the Irish male experience of emigration that suggest the unique capacity of cinema – and of Collins’s cinematic approach – to capture the conflicted and often contradictory nature of the Irish migrant psyche.

The opening 30 minutes of the film, shot in black and white and with sparse Irish language dialogue subtitled to English, are an unapologetic homage to the physical beauty and cultural vibrancy of Connemara in the early 20th century.

The influence of Tim Robinson’s Stones of Aran: Pilgrimage on the director’s sense of place is easily traced, through extended ethereal shots of cairigín floating in religiously-white sea-foam, bog-cotton swept by the wind and neighbours huddled silently around the hearth, sipping tea, eyes averted downwards while a neighbour sings from memory a tune drawn down from the bards.

A brief classroom scene in which Heaney and his young contemporaries awkwardly recite the National School Catechism through rote-learned English, is the only indication of the approaching encroachment of modernity on this last generation of Irish-speakers.

Otherwise, theirs is a boundary-less world in which valleys are explored for curlew nests, land is worked through the meitheal and the strains of an accordion played for no one in particular drifts from the intimacy of a harbour-side doorway down to the untethered openness of the sea.

It is Heaney’s sudden and unexplained departure to England that ruptures time, setting in motion a period of transience from which he never fully recovers.

Collins avoids narrating the unfeasibility of life in Connemara in the 1950s, and resists the temptation to dramatise the moment when Heaney is told that his father is dead. According to his documenters, Heaney was walking the road home after a long period away when he came upon a funeral. Only as the hearse passed was he told that it was his father who was about to be buried.

Instead, he jolts the viewer out of pastoral meditation with an unexpected shot of a grown-up Heaney, who has acquired a suit and a smoking habit, waiting for a lift at the side of an empty road.

Later, we hear him sing in English for the first time, in a Cricklewood-style bar stained with cigarette smoke and spilled beer. Young Irish migrants drunk on the novelty of public Irish music performances team around the musicians, whose singing has taken on a high, forced tone.

For, despite their festival spirit, the celebration and defiance of these performances were a response to the latent anti-Irishness, and demonstrate the needs of young Irish emigrants to congregate and tangibly define an ethnicity that, prior to emigration, required neither explanation nor justification.

(England was where the pub-based Irish music session was institutionalised, due in large part to the refusal of landlords to let their Irish tenants congregate in already crowded digs.)

Here, we listen to Heaney attempting to explain his singing to a zealous interviewer, his words falling like cold marbles against a hard ground.

Why does Heaney leave Connemara, and why does he stay away?

“You always had your eye on the horizon,” Heaney’s friend tells him during a brief trip back home. But that wasn’t true. Collins shows the young Heaney handling stone with an artist’s wonder and hunched over the intricacies of long grass and valley streams, instead of looking out to sea, suggesting an innate attachment to home.

Emigration, then, was forced economic exile, no matter what those who stayed at home may have said, and England in the 1950s and 1960s bred a self- corrupting addiction to anonymity, work, and accelerated consumption.

Heaney’s wife and children, we learn through haunting domestic frames, spoke with British accents and were cramped into a house of cheap textiles and sharp right-angled corridors: a prison of plasterboard for those who knew the raw stone of Connemara.

Song of Granite then succeeds in capturing the psychological turmoil of thousands of Irish migrants who experienced not just a loss of landscape but also the destruction of a rural, communalistic culture by an urban, individualistic superstructure. There was no choice for immigrants like Heaney other than to face this societal overhaul and get on with it. Except that Heaney had his tunes. In the end, Heaney’s sean-nós was perhaps his only way to protest that great and terrible passing.

Dr Sarah O’Brien is director at the Centre for English Language Learning and Teaching at Trinity College Dublin.