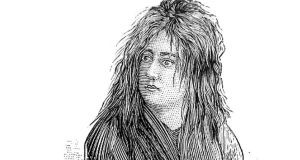 Lizzie Brown Halliday (c1860 - June 18th, 1918) was the first woman sentenced to die in New York State’s electric chair (1894) but her sentence was commuted based on insanity and she spent the rest of her life in a mental institution. Image: New York NY National Police Gazette, September 23rd, 1893/Wikimedia Commons

Irish-America is awash with stories of successful Irish migrants; the men and women who built industrial cities, served its people, or educated its children.

Lizzie Halliday, who left Co Antrim as a child, is not an Irish-American success story. She was described by the New York Times at her death in 1918 as the “worst woman on earth”. She was the first woman sentenced to execution in the US by the electric chair.

Halliday had reportedly been married six times by the age of 30. Her involvement in her husbands’ deaths was unquestioned, until the body of her sixth husband was discovered under the floorboards of their house, and two neighbours were found dead in a nearby barn.

Her perceived mental ill-health saved her from electrocution. Instead, she was incarcerated in an asylum, where she would go on to kill an attendant by stabbing her with shears.

This serial killer’s crimes were unusual, but the arrest of Irish women in North America was not. Irish women were regularly the largest ethnic group in courts and prisons. Between 1860 and 1881, Irish women in Toronto Jail made up around 60 per cent of the entire female prison population, outnumbering every other nationality - including Canadian-born women - combined.

Irish women also occasionally outnumbered Irish men. In 1861, Irish women were arrested 12,603 times in New York, while 11,672 arrests involved Irish men. Women tend to be fewer in crime statistics generally, both historically and today, so the overrepresentation of Irish women is particularly striking.

The “Bad Bridget” project that we have been working on for three years explores the history of criminal and deviant Irish women in North America from 1838 to 1918.

During this period, more than five and a half million migrants departed Ireland for North America. A desire to demonstrate that those who left poverty in Ireland successfully climbed the social ladder in the “new world” have swept stories of criminal women like Lizzie Halliday under the carpet.

But take a peek under that carpet and you’ll find many other colourful characters. Like Ellen Price, who appeared in court in Toronto in 1865, described as “drunk as usual, with a flaming red feather in her hat, her face coloured by the use of alcohol”. Led from court to serve 60 days in prison, Price launched into a chorus of “Rocky Road to Dublin”.

Or the young Irish servant on route to church in New York in 1885, who followed a group of women she believed were also going to church. She ended up in prison, because they were a party of 37 sex workers who had just been arrested for soliciting.

The arrest of Marion Canning in 1891 demonstrates how a study of “Bad Bridgets” offers an alternative narrative on Irish migration. Leitrim-born Canning was sentenced to seven years in a New York prison after Richard Bronkbank, who had commissioned her services for the night for $3, falsely accused her of stealing from him.

Rather than her sending home money to her family, or funding the migration of a sibling, it was her father who sent a bank draft to the US to secure her release from prison and her return to Ireland, along with a promise that she would never again visit the US. Canning’s American dream had evidently become a nightmare.

Stories of Irish criminal women also make clear their poverty, the hardships experienced as a result of deficits in education or employability skills, their difficulties adjusting to new cultures and climates, their lack of support networks abroad, and the discrimination and prejudice that they faced, often cast as brutish, ignorant, diseased or uncivilised.

“Bad Bridget” might not be the traditional emigrant success story, but such experiences are revealing, and still familiar today. History chooses to remember certain individuals, and nations choose to claim certain sons and daughters. But perhaps it’s only in remembering the complexities of migratory stories that we can understand the breadth of experiences, both then and today.

This Extraordinary Emigrants article was written by Dr Elaine Farrell and Dr Leanne McCormick. To learn more about ‘Bad Bridgets’ join them in conversation with Dr Angela Byrne, Department of Foreign Affairs and Trade historian-in-residence at EPIC The Irish Emigration Museum on February 27th. epicchq.com