Why are some people reluctant to call Donald Trump racist?

Kellyanne Conway, an advisor to Donald Trump, has defended the US president over tweets he posted telling US congresswomen to go back to the countries "from which they came" by asking a journalist about their own ethnicity. Video: C-Span 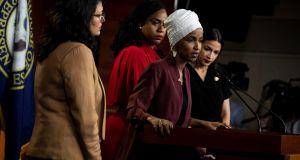 What is racism? “It’s pointing out that I am different to you based on a physical characteristic or an ethnicity or a religion,” says Dr David Ralph of the Sociology Department in TCD. “But it’s not just pointing that out. It’s saying I am superior to you because of that difference… I’m superior to you because my skin is white and yours is black, or because I’m a Christian and you’re a Muslim… It’s the manipulation of difference to basically control another.”

Unesco defines racism as “a theory of races hierarchy, which argues that the superior race should be preserved and should dominate the others. Racism can also be an unfair attitude towards another ethnic group. Finally, racism can also be defined as a violent hostility against a social group.”

Does Dr Ralph think Donald Trump’s recent suggestion that four Democratic congresswomen should return to their countries racist? “Yes... These four women are American citizens. He’s clearly referring to their ethnic heritage and suggesting that they’re somehow not real Americans because they’re not Caucasian… The cheapest punch really, is to hit someone with ‘Go back to where you’re from.’ Absolutely, it’s racist.”

Is making a racist statement necessarily a sign someone is a racist? “In the context of our lives I’m sure everyone utters some kind of racist epithet... You could utter a racial slur and hurt somebody without necessarily meaning to… You may accidentally use the wrong nomenclature and someone might find it offensive... To take one thing someone says once, I don’t know if that condemns them as a racist per se.”

But what if someone has a track record of such statements? “They could be a bona fide racist.”

Trump, he believes, has such a track record. “I think he is a racist president. I get the students to read an article by Ta-Nehise Coates called The First White President and that outlines the bloody heirloom of his whiteness and how it has been an advantage that has accumulated over generations… I think he is rather blatant about that and unrepentant and undisguised.”

Why are some politicians and journalists so reluctant to use words like “racist” when talking about Trump? “Part of the reason for that was that with the election of Obama there was a lot of talk about we now lived in a post-racial age… The election of Trump has shown that that was fantasy thinking. We’re not living in some sort of post-racial nirvana and a lot of these grievances were just frozen for a period of time… People are reluctant to name something because they think we live in this post-racial age when we clearly don’t.”

He also notes the way Kelly Anne Conway recently asked a reporter his ethnicity and then referred to her own ethnicity (Irish and Italian) when questioned about Trump’s statements. “Groups that we might call out as prejudiced or discriminatory or racist, part of their defence now is that, ‘We are a racial minority too.’ There’s been a resurgence of white ethnicity – Italian American, Irish American, Polish American… For a long time whiteness wasn’t seen as an ethnic category, just a default category and all other ethnicities orbited around that. In recent decades certain white groups have discovered their own heritage as a way to play the ethnic card.”

Racism changes form over time, he says, and he thinks right-wing ideas are moving into the mainstream again. “A racist now will rarely use that classical enlightenment definition of racism... The racist will use euphemisms. They won’t say ‘I think Latinos and Africans are inferior to me’, they’ll attribute certain characteristics to those populations without referencing their skin colour... Those are the tactics.”

Should the media lose their reluctance to name people and behaviour as “racist”? “It’s through the euphemistic reporting of statements by the likes of Trump or Johnson or Viktor Orban that this stuff filters down into the normal discourse… Absolutely, the non-euphemising of social realities would be a good idea.”

Dr David Ralph specialises in migration and family and teaches, among other things, a module called Race, Ethnicity and Identity.