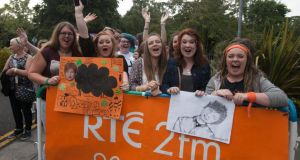 Ed Sheeran fans queue before an intimate gig for RTE 2fm in front of an invited audience of listeners at RTE Radio studios. Dan Healy, the controller of 2fm, has said it is a matter of public record that he has been given between 24 and 36 months to turn the station around. Photograph: Gareth Chaney/ Collins

The controller of 2fm has said it is a matter of public record that he has been given between 24 and 36 months to turn the station around.

Dan Healy said it was “above my pay grade” as to what will happen to 2fm if he does not succeed in arresting its decline, but he expressed confidence that he can turn the station around.

The latest Joint National Listenership Research (JNLR) show 2fm’s share of the radio audience dropped from 7.1 per cent to 6.6 per cent year on year.

The commercial broadcasting sector described 2fm’s audience share, the lowest in the station’s history, as “miserable” and asked the Minister for Communications Alex White to tackle the station’s loss-making status within RTÉ.

Mr Healy said he had told staff last week that he expected 2fm’s audience share to be as low as 6.4 per cent as stations often lose audience when they are subject to radical change.

Mr Healy was brought in this time last year to turn 2fm around. He has completely rearranged the schedule bringing in the Breakfast Republic team to replace Hector Ó hEochagáin. He also brought in former Westlife singer Nicky Byrne for the mid-morning slot and moved Colm Hayes to 2fm Drivetime.

Long-term DJs Dave Fanning and Larry Gogan were both shifted to weekend slots.

Independent Broadcasters of Ireland (IBI) executive director Lisa Ní Choisdealbha stopped short of saying that RTÉ should close 2fm or sell it to the private sector, but she said 2fm must either become a public service broadcaster and not have a commercial remit or “wash its face” by living within its revenues.

Ms Ní Choisdealbha said the RTÉ annual reports showed 2fm received at least €11.6 million from its parent broadcaster between 2012 and 2013 which she said raised “huge questions” about its commercial viability.

Mr Healy conceded that RTÉ had been subsidising 2fm for a number of years, but he said 2fm had made millions for RTÉ in the past and he anticipated the station will break even by the end of next year.

Advertising revenues were up by 19 per cent in the year to July, he maintained and advertisers were appreciative of what was being done to attract a bigger audience in the 25 to 34 age category.

Mr Healy, who came from the independent sector, said there was an irony in the IBI critising RTÉ for a waste of resources when it is, as he put it, controlled by a billionaire (Denis O’Brien) and a PLC (UTV Media PLC).

“They have their own issues and we have our own issues,” he said. “My job is to turn around 2fm. It took from June to December to decide what is the correct thing to do in the terms of the schedule,” he said.

“We’re only three and a half months into it. I think rumours of our demise are greatly exaggerated. We’re still the third most listened to radio station in the State.”