Radio: Head to heads that just made you want to hear a woman’s voice

In the first week of Pat Kenny versus Seán O’Rourke, Irish stations should remember that life’s not all about men 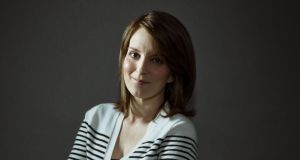 Contender, ready? Gladiator, ready? Three, two, one: radio wars! On Monday morning all ears were on Newstalk and RTÉ Radio 1 as Pat Kenny and Seán O’Rourke went head to head. In the red corner, Newstalk urged listeners to “move the dial” to The Pat Kenny Show (Monday-Friday). (Shouldn’t that be “turn the dial” or “press the button that has replaced your dial”?) In the blue corner, RTÉ did everything it could to remind the audience that Kenny was still haunting the Today with Seán O’Rourke studio (RTÉ Radio 1, Monday-Friday).

Going for a casual introduction, Kenny fluffed his opening links. For the first time ever he sounded nervous. O’Rourke was a little steadier, but the scaffolding around his freshly built show collapsed with one of Oliver Callan’s skits, slagging off Kenny along with other dodgy mimicking.

The only thing more awkward than Callan’s humourless radio stints is the forced laughter that presenters seem contracted to emit on their conclusion. RTÉ is hardly a stranger to self-reference, self-congratulation and self-satisfaction, but O’Rourke’s team should remember that talking about oneself is just a skip away from talking to oneself. Leave that to Kenny, who had his Newstalk colleague Ivan Yates lined up as an interview on his debut.

O’Rourke poker-faced with Hans Blix, but Kenny went all in with Bono. One finds big guns; the other is the big gun. Kenny chatted to the U2 man as if they happened to be in their back gardens at the same time, exchanging neighbourly pleasantries over the fence.

Kenny was remarkably hands off when questioning Bono about the Red campaign – Bono believes capitalism is Africa’s long-term way out of desolation; he might want to look closer to home to see how that’s getting on – and Edun, the clothing line of his wife, Ali Hewson, which has haemorrhaged money in the past yet is barrelling ahead with the noble cause of manufacturing in Africa.

Bono’s lifelong passion for and dedication to the continent resulted in informative chats about Ghana, and a tribute to Seamus Heaney was personal and sweet.

After day one on the radio-wars front line, which was the better show? You’d have to give round one to Newstalk.

Someone named Thomas rang Liveline (RTÉ Radio 1, Monday-Friday) on Tuesday while Philip Boucher-Hayes was filling in for Joe Duffy. The subject was mortgage arrears. “Everyone’s got a sad story,” Thomas said, “but sad stories don’t mend things.” Thomas had lost a pension, was out of work for two years, and started volunteering to fill the time. No one looks at the bigger picture, he said, no one looks at their communities. It’s not often that something profound transcends the minutiae of moaning on Liveline, but Thomas had it, criticising people’s individualism and encouraging a broader approach.

Boucher-Hayes doesn’t have the Everyman touch of Duffy, but on Tuesday’s show he steered the topic towards an expert-led discussion with Julie Sadlier, a solicitor with the Phoenix Project, which give free legal help and advice to people struggling with debt, and David Hall, director of the Irish Mortgage Holders Organisation. It was what public-service broadcasting should be all about: valuable, helpful information that favours perspective over panic.

A fertility-clinic doctor, John Waterstone, was one of George Hook’s guests on Wednesday’s The Right Hook (Newstalk, Monday-Friday). Who better to discuss women’s fertility than two men? Both alluded to the preposterousness of this set-up. Hook said he might annoy feminists. Waterstone joked about getting beaten up by his wife. Maybe he hadn’t heard that this week the charity Amen reported a 68 per cent rise in the number of men contacting it about being victims of domestic abuse.

Then the unthinkable happened: a woman texted in suggesting that perhaps women have the right to make their own choices about their fertility. He knew he’d get a text from “someone like Anne”, Hook spat, before delivering a snide smackdown that could discourage any female listener from daring to text his show again. Maybe that’s the point. It was a horrible, nasty moment.

In stark contrast to Newstalk’s old boy’s club was Tuesday evening’s Arena (RTÉ Radio 1, Monday-Friday). Evelyn O’Rourke had a recorded interview with Margaret Atwood. Overly interrupted by Seán Rocks and O’Rourke, it was nevertheless a funny and cerebral item.

Then Edel Coffey popped in to chat about female-led television, on the back of the announcement that Tina Fey would be returning to the small screen. Coffey rightly pointed to Bridesmaids as a tipping point for female-focused comedy. “It seems incredibly stupid to point out,” she said, “but it almost seemed as if it was a realisation that women could be funny.” She underlined the importance of having women’s stories in such media: “You can see your life reflected in them . . . Your life feels normalised . . . We’re seeing all sorts of aspects of femalehood on television.”

After that, Noelle Brown came on to talk about her upcoming show at Dublin Fringe Festival.

Imagine if Newstalk’s management were listening. Imagine if it realised that women’s voices, stories and perspectives make good radio. Forget about a helpline for clueless dial-movers: Newstalk has far greater problems with its exclusion of female voices and listeners.

Mick Heaney is on leave