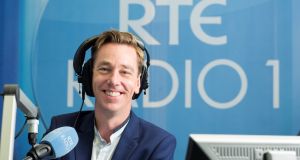 RTÉ presenter Ryan Tubridy: given how his week has started, he can perhaps be excused for his curmudgeonly mood

Even in the run-up to the Late Late Toy Show, Ryan Tubridy (RTÉ Radio 1, weekdays) struggles to find the Christmas spirit this week. On Wednesday, he sounds a weary note at the imminent arrival of seasonal music on his programme, as he plays snippets of holiday favourites and passes judgment on their merits.

His opinions range from the reasonable – the Pogues’ Fairytale of New York is indeed best enjoyed after a few drinks – to the harsh: does Wizzard’s Phil Spector-ish I Wish It Could Be Christmas Every Day really deserve the opprobrium with which Tubridy treats it?

Either way, his disposition is not of the jolly bent one expects from someone about to launch thousands of rewritten Santa letters with his festive television exertions. But given how Tubridy’s week has started, he can perhaps be excused for his curmudgeonly mood.

On Monday, he talks to Anne Kelly, whose story the host describes as “tough”. To call it thus is to give it an unduly positive spin. But then Kelly’s experiences are so appalling as to be almost beyond words. Yet in somehow being able to recount them in a quietly articulate fashion, she demands the audience’s attention, much as we may wish to turn off.

Kelly recalls how, as a child, she was sexually abused for three years by Eamon Cooke, the late owner of pirate station Radio Dublin and “one of Ireland’s most prolific and dangerous paedophiles”. She details being groomed as a seven-year-old by Cooke, who filmed her dancing with her friends, using “the little movie” to lure her into his house, where he first abused her. His initial apparent kindness soon disappeared, as he made threats that if she ever told her parents, she would be put in a children’s home.

The vile power he held over young Anne was such that “if he saw you in the street, he would give you a certain nod and you had to go in”. This simple phrase alone carries enough material for a lifetime’s worth of nightmares.

Tubridy, whether through discretion or mere shock, remains largely quiet, though he does capture the unimaginable confusion caused by the “vicious cycle” of child sexual abuse, “from the horror of that house to the warmth of home and then the loneliness of nighttime”.

Even after Cooke stopped abusing Anne when she 10 years old, there was no respite in his intimidation. At one point, she tried to kill him, but was prevented from doing so by her mother. Both women were arrested, but not Cooke. He was eventually convicted in 2003, but it was only when he died in June that Anne finally had “liberation from the fear I felt”.

It’s a shattering interview, its impact heightened by Anne’s calmly matter-of-fact retelling. There are few positives to be found. Tubridy latches on to the detail that after Anne finally told her father, “he dealt with Eamon Cooke in that very male fashion”. The presenter is only echoing the reaction of any father when he says “I would have done the same”, but the alacrity of his statement seems jarring in the context.

Otherwise, there is little to do but try to listen, and hope that anyone else suffering such an ordeal draws strength from Anne’s testimony. Certainly that’s Tubridy’s take, as he seeks “an upbeat note” to end the conversation on. But if the item does anything, it reaffirms the rather unfashionable notion that evil does exist. More troublingly, it reminds us that we often don’t notice its existence until it’s too late.

The desire to make the best out of a bad situation underpins the Documentary On One: Kicking The Bucket (RTÉ Radio 1, Saturday and Sunday), which looks at how humour and creativity can help people dealing with grief and the prospect of death. On the face of things, the documentary’s premise doesn’t necessarily set the pulse racing (if that isn’t too inappropriate a phrase).

It chronicles a series of workshops held in Limerick, funded by Milford Hospice and run by local arts figures Sinéad Dinneen and Katie Verling, which sought to find the “lighter side” of illness and dying.

Any whiff of worthiness is quickly dispelled, however, as we hear Dinneen reading a story about parental death to her young son Isaac: having been diagnosed with ovarian cancer, she is preparing him for the idea of her eventual absence. This experience of grave illness, which she shares with leukaemia survivor Verling (who co-produced the documentary with Ronan Kelly and Sarah Blake), prompted the two women to set up their project earlier this year, with the aim of staging an exhibition at the end.

Those attending the workshops come for different reasons, from the loss of beloved mothers to the devastating loss of a child. But all open up in an environment where working on memorial exhibits provides a welcome distraction: “It’s much easier to talk about things when you’re concentrating on your hands,” says Verling.

Certainly, the participants appear to find solace crafting artefacts in memory of their loved ones, and also by the simple act of remembering. “If someone grieves for you, in some small way you’ll have touched someone with love and that’s what remains,” says Maura, describing an afterlife that even the most ardently atheist disciple of Richard Dawkins surely couldn’t quarrel with.

But the real joy of the documentary lies in the jags of black humour that punctuate the ruminations about our unavoidable mortality. Dinneen describes buying 13 minnows two years ago, whose short lives would mean she would have 13 deaths to discuss with her children.  “But only two of the feckers have died,” she ruefully remarks. After this week’s stories, the old chestnut about having to laugh or else you’ll cry has never rang more true.

Moncrieff asks Williamson if people are offended by his spoof stories. “One time we got a letter from this guy, I can’t remember his name, Denis O’Ryan or something,” says Williamson, in deadpan manner.

“He wasn’t happy about one of the articles I did,” he continues, adding that he removed it: “If someone is that upset, you’d feel sorry for him.”

Moncrieff laughs heartily, but doesn’t pursue the matter. That Newstalk is owned by Denis O’Brien, who coincidentally threatened to sue Williamson’s site, clearly has nothing to do with this.