Steve Wickham: On My Culture Radar 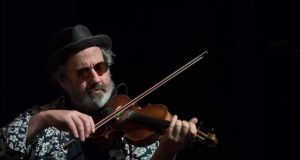 Steve Wickham: “I’m not fond of cities, all the pushing and shoving and the trains and taxis. That’s probably why I live in Sligo.”

I’m a voracious reader, I get through a book every few days. It’s a great antidote for when you’re stuck on a train, travelling around to gigs. The last book I read was Reality is Not What it Seems by an Italian writer called Carlo Rovelli. It’s an excellent look at quantum gravity. He has a notion there’s no such thing as time and infinity, and he talks about the cloud of possibility for each electron.

It has to be Rugantino, in Sligo. It’s right beside the river, and it does genuine rustic Italian food. There’s a couple of great cooks, smart waiters, and a really cool guy who runs it called Antonio. I usually order the daily special, which might be something like seafood pasta or Italian sausage and pasta. I’m not fussy with my food and the chefs are so good that I know I’ll like it.

Tommy Cooper tickled my funny bone. “I slept like a log last night. I woke up in the fireplace”. He was just so pure and tragic, and his face was amazing. He was a clown, simple.

My wife, Heidi Wickham. She works in charcoal, and has an exhibition coming up in the Russell Gallery in New Quay, in Clare. The sign of a good artist is finding a truth in oneself and bringing it out, and she’s very honest in what she sees. She’s well known for drawing animals, but she also thinks outside the box – for example we went up to Iceland and she did work based on Nordic mythology. I have a great admiration for her, not only because she’s my wife but also I know how hard artists work.

I’m not fond of cities, all the pushing and shoving and the trains and taxis. That’s probably why I live in Sligo. I’ll always love Dublin because I was born there, but if I had to move anywhere it would be Paris. Cities usually gather human beings together in packed conditions and once people finish work, they’re gone. But there’s an elegance to how Parisians go about their business. The city seems inhabited by residents. You walk down the middle of a major boulevard and there’s a school and bread shop and a wine shop. It’s lived in. It’s the same for San Francisco.

Robert Duvall. He played Michael the fixer in The Godfather. But that’s not his greatest role over the years, and he was in The Judge most recently. He understands the craft of acting. I believe him when I see him; I don’t think he’s anyone else other than who he’s playing at that time.

I listen to RTÉ’s Documentary on One all the time. There was a fantastic episode recently about two sisters, an American girl in Texas who went to visit her aunt who was an 87-year-old nun who’d come out from Galway in the 1980s and set up a school for African American children. There’s a cliché about nuns being psychopaths, but these nuns were amazingly clever. For that generation, there was no way they were going to inherit the family farm or get an education, so they went to Texas and got fantastic degrees and became involved in social activities. It was an absolutely amazing story, very moving. The person who made the documentary really uncovered something.

I like Twitter – not to contribute but to listen to the birdsong of it. I read a lot of Mike Scott from The Waterboys (@MickPuck). He’s like a grumpy old man on it, he just says what he feels. He’s quite vocal about things we all feel strongly about, like misogyny and racism. He calls people out for what they are. Generally I don’t do that, because you have to be very good with you words; writers and lyricists like Mike are able to articulate and condense the problem, and win battles that way.

I’m not a big TV person; I’ve never seen Breaking Bad or Love/Hate, for example. Having said that I do love Game of Thrones. I don’t know what I’m going to do once it’s finished. I’m guessing that it will end with Danerys on the throne, and she’ll marry the beardy guy. They’ve both got an immortal thing going on.

Steve Wickham’s installation Geronimo appears at Ballymote Library on July 19th to 28th, as part of the Tread Softly festival.

The Books Quiz: Who imagined the UK going broke after leaving Europe?
8