This other ‘other Eden’

Can Shakespeare’s drama of a dethroned English King be turned into an Irish history lesson? 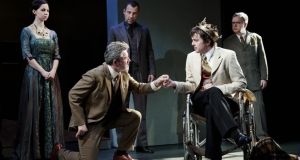 Richard II: ‘The commitment, brio and invention of this production makes it well worth seeing’


There is a scintillating story about Queen Elizabeth I’s reaction to Shakespeare’s history play, Richard II . A laborious depiction of an ineffectual and unloved monarch who is soon usurped, it was funded by the e arl of Essex, who was drumming up support for his own planned rebellion at the time. The q ueen saw right through it: “I am Richard II,” she complained. “Know you not that?”

This energising co-production of the seldom-staged play from Ouroboros Theatre and the Everyman now tries to make Richard II stand for something else. Performed on Joe Vanek’s malleable set, which pointedly resembles an Anglo-Irish history museum, director Michael Barker-Caven attempts to bring the play closer to home. Here, props are fished from display cases and battle maps torn from frames, while design,performance and directorial flourishes superimpose an image of Irish history on the play. We are Richard II. Know you not that?

It is an invigorating idea, drawn from the fact that one of Richard’s many rash acts involved his war in Ireland. But however adventurous the staging, the play doesn’t quite support the interpretation. Played as a shrill weasel by Patrick Moy, Richard is surrounded by a sniggering, foppish coterie, as though he was the leader of a seamy Victorian subculture.

Shakespeare sets his action in England and Wales, leaving bothersome Ireland offstage, but when Frank McCusker’s excellently portrayed Bo lingbroke is seen in exile, leading a band of men in Irish Volunteer costumes, Barker-Caven grafts another narrative on to the story. Admirably daring, visually impressive and expertly lit by Kevin McFadden, it nonetheless becomes bewildering. Through force and political chicanery, Bol ingbroke becomes Henry IV and we watch Richard move from hypocrite to hysteric, then from lyrical orator relinquishing his crown to finally – and most audaciously – a political prisoner smearing excrement on his prison cell over the strains of U2’s Sunday Bloody Sunday . Huh?

Such associations will seem either dizzy or crass, but they smack more of an effort to compensate for an unsympathetic protagonist – lurching from twerp to hero – and an inconclusive play (the first of a tetralogy). The drama’s real meat, forcefully realised in Des Nealon’s stirringly performed Gaunt, Jane McGrath’s anxious q ueen and Denis Conway, Rachael Dowling and Shane O’Reilly’s explosively divided house of York, lies in how allegiances and betrayals become a family calamity.

Ouroboros’s current mission, eloquently expressed in the programme, is to find an Irish voice for Shakespeare. While his imagined Illyria, Venice or Denmark might accommodate it, the fixed position of the history plays resist it. The commitment, brio and invention of this production makes it well worth seeing, but when Richard II’s depos ing i s an inside job, revolutionary references clang more often than they chime.
Until May 4th at the Peacock and May 7th-11th at t he Everyman, Cork