As the Abbey revisits John B Keane’s tragedy of lust and lucre, is it safe to go back into the kitchen? 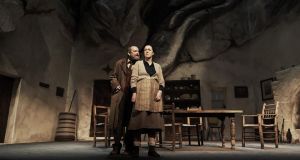 It’s been a while since we last set foot in the kitchen. The Abbey’s revival of John B Keane’s early work (rejected by the theatre in 1958, but now on the Leaving Cert syllabus) returns to this vision of an older Ireland and its uneasy transition towards modernity. Some will see it as a familiar space teetering towards cliche: home is where the hearth is. Conall Morrison’s reverent production recognises two worlds, however: the social realism of a changing Ireland and the dimensions of something mythic.

The point is most conspicuous in Sabine Dargent’s huge set, extending from the strict details of Keane’s drab cottage and twisting upwards through gnarled folds and crevices, like a rock formation or a horrible disfigurement. It doesn’t quite work – it dwarfs the performers and loses the play’s important claustrophobia – but it recognises where reality meets folk tale.

The story borders on fairy tale: the young, educated Sive (Róisín O’Neill) is raised by her protective grandmother (Bríd Ní Neachtain), dutiful uncle (Barry Barnes) and “wicked” aunt Mena (Derbhle Crotty). When Mena conspires with Simon O’Gorman’s unconscionable matchmaker Thomaseen to marry the girl off to a farmer old enough to be her distant ancestor, the tragedy is set in motion. Underlying the fable is something carnal and grubby: sex and money. Keane approached both subjects fearlessly, but the production is much more hesitant, laying no great stress on interpretation.

In puritanical Ireland, Sive’s illegitimacy (“There is fierce bond to the word and great length,” says the excellent O’Gorman) contains the same anxiety as Seán Dóta’s unseemly lust. In Daniel Reardon, however, Dóta is coarse but not lecherous, and the production is in danger of losing its teeth. What comes across more unflinchingly, and unusually, are the economics of Mena and Thomaseen’s disillusioned world, where romance is an unaffordable luxury. Crotty gives Mena the muscle and hunch of someone born to hoist a pale, and Crotty anchors Mena’s resentment in circumstance, allowing flickers of self-recrimination.

The two “men of the road”, Frank O’Sullivan’s Pats Bockcock and Muiris Crowley’s Carthalawn, who spill blessings and curses, have always been something of a chorus, but they are also chroniclers, preserving events in song while describing the road ahead. “The face of the country is changing.”

For Sive, the tragedy is that a conservative country can’t change fast enough; for us, that it might change again. Even at this distance, though, audiences will murmur and gasp, as they always have, at slammed doors, undelivered letters and cruel fates. Sive has always been one for the folk. Until April 12

How to be Nowhere: sharp, lyrical take on Central American violence
10