‘It’s not a historical piece. This is theatre.’ Here’s how Signatories took shape 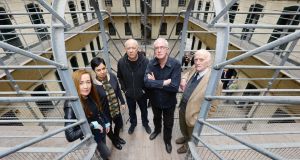 Like many good things, the idea for the theatrical production, Signatories, came together over a cup of tea. Eilis O’Brien, UCD’s director of communications, and playwright Frank McGuinness, who is the university’s professor of creative writing, decided to ask eight Irish writers each to write a monologue for the seven signatories of the Proclamation, and one for nurse Elizabeth O’Farrell who delivered the surrender.

It was a one-line brief, says O’Brien. “When you look at the line up, you don’t really dictate to these people what they do . . . We asked them to be as creative as they wished.” Sticklers for fact should take note. “It’s not a historical piece. This is theatre.”

The line-up includes playwright Marina Carr and the Oscar-nominated Emma Donoghue. Seven of the eight are UCD graduates. There was no consultation between the writers, but O’Brien says “there was something almost symphonic in how they fit together . . . so the sequencing of them, which was [director] Patrick Mason’s choice, proved that they didn’t need to collaborate to create the piece.”

While the piece was written for an initial performance in Kilmainham Gaol, it will also tour around Dublin to Dún Laoghaire’s Pavilion Theatre, the Civic in Tallaght, and the National Concert Hall, where one of the writers, Thomas Kilroy, will be presented with the UCD Ulysses medal.

When O’Brien and McGuinness approached Mason with their idea, he welcomed the challenge.

“In one way, the form, the dramatic monologue is very static, very focused. It’s a very tight discipline to write 12 minutes,” he says. “But how do you make an evening of theatre out of it?’’

They sat down to brainstorm. “This is where I floated the idea of Kilmainham. I just thought it would lend itself to a site-specific production,” Mason says.

The audience will move around the space from one actor to the next. The idea is based on the movement of nurse O’Farrell around the city. “She’s slogging around Dublin trying to get each garrison to surrender and that was suggestive of a shape we could put on the production,” says Mason.

Despite the lack of collaboration “a kind of narrative emerges through the pieces”, and not all of the monologues are from the mouths of the signatories. He mentions Éilís Ní Dhuibhne’s piece, in which “you encounter Seán Mac Diarmada through the eyes of Min Ryan, who was his fiancée”.

This is writers and dramatists, he says, “imagining in between the spaces what went on. It’s woven around the historical facts. The public record is one thing, the historical record is another thing, and then what was the inner life? You need writers to explore that. And that’s what theatre does. We have an idea of these national icons, but they were flesh and blood.”

When I speak to Donoghue, she has just listened to a radio programme where McGuinness gives her credit for including O’Farrell. “I don’t deserve any of that credit; I’d never heard of her,” she says. “Éilís came to me with the entire project thrillingly planned and said ‘we think you should do Elizabeth O Farrell’.”

Growing up in Ireland, Donoghue had always had “a particular dislike for the whole nationalist history. It struck me as depressing that we had so many botched revolutions that come across as tragi-comic ineffectiveness . . . and then also I associated it all with the IRA bombing in the North. Like many southerners growing up, I just thought it was all repulsive – whatever motivated people to kneecap each other and to blow up children in shopping centres just struck me as repellent so I took no interest in all that stuff.”

However, as an author who often immerses herself in the “grittiness” of historical fiction, Donoghue was delighted to take part in Signatories, “partly because it’s very smart in how they planned it. There was no attempt to get us to in any way agree. No discussions, no ground rules. We were free politically and artistically to do what we liked with these people.”

Sitting down to do a read-through with the other writers for the first time last December was a little daunting.

“I remember coming home and saying, okay, not the best by a long shot. Not the worst, either. It’s not even competitive. You’re just nervous. It’s also thrilling to work with these people. Playwrights like Marina Carr and Frank McGuinness: I revere their work.”

Donoghue based her piece mainly on an account O’Farrell gave to a journalist several decades after the Rising.

“She’s so unlike the others. She’s not one of the signatories; she was part of the rebel army but she was not fighting exactly. What really struck me about her was the difference of her situation, that she was a survivor of this tragic event.”

The details of the surrender took Donoghue by surprise. “I had assumed that she just kind of walked down Moore Street, handed over a piece of paper and there you go . . . actually she spent the entire weekend trekking back and forth over the city.

“She’s not tragic in the same way as the others. She wasn’t shot in a chair or anything but she had this gruelling task that was very much in the whole tradition of penitential walks, like going around Lough Derg in your bare feet. It was sort of sorrowful and ritualistic task, so I decided to stay very focused on that.”

She believes the value in the 1916 commemoration celebrations lies in asking “whether we’ve lived up to some of those original promises. I was very struck, in Ken Loach’s film The Wind that Shakes the Barley, by how much of a utopian feminist socialist impulse there was in those early revolutionaries.”

Hearts and minds Like the poet and playwright signatories, Donoghue thinks writers can still wield “a huge amount of influence”. She refers to the reach of social media. “It’s less and less about bullets and more about hearts and minds . . . I’d say there’s a lot of politics in my writing.”

There is even a political edge to her new books for children. “I’m keeping the tone really light-hearted. It’s about a family made up of a lesbian couple and their kids and it’s a very multiracial family. It’s a story all about diversity and really pushing for that. So I don’t think that political work has to necessarily feel like politics.”

Unlike Donoghue, writer Joseph O’Connor asked specifically for the Joseph Plunkett monologue. “I’ve been interested in him and the Gifford sisters for a long time,” he says. “On a school trip to Kilmainham when I was nine or 10, I saw a drawing that Grace had made on the wall of her cell. I found it touching that she felt even such a terrible place could be a tiny bit redeemed by beauty. The story of Plunkett and Grace’s wedding stayed with me very profoundly.”

In researching his monologue, O’Connor was able to draw on some of the themes and research from his own work, in particular his novel Ghostlight.

“I’m interested in readings of the Rising that look on it as an act of theatre. It can’t be a coincidence that so many of the leaders were artists. And, from that point of view, I think the decision of Plunkett and Grace to marry is fascinating. Every wedding ceremony is a piece of theatre. I think Joseph and Grace knew how powerful and lasting the imagery would be.”

O’Connor has previously rejected the “historical fiction” label for his novels, saying that such writing is often more about the present than the past. Similarly, he sees his Plunkett monologue as being “absolutely about now. There’s one point where he’s talking about Larkin [who, in the play, he dislikes as a Scouse bore], but he says Larkin was right when it came to the important realisation that ‘Ireland doesn’t need to be a slum with a casino attached’. That was true in 1913 and it’s true today.”