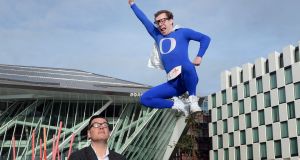 Dublin Theatre Festival director Willie White and Oberon, played by Harry Jardin from the cast of Shakespeare’s ‘A Midsummer Night’s Dream’, at the launch of the festival, which runs from September 29th to October 16th. Photograph: Eric Luke

is Energy Theatre and Opera Theatre Company’s production of Mozart’s Don Giovanni in a new translation by Roddy Doyle at the Gaiety Theatre.

The festival, now in its 59th year, continues for the next 18 days with 28 productions from Ireland and across the world in a programme that includes drama, opera, dance, performance art, documentary theatre and film.

“There’s been a great response to all the headline shows,” said festival director Willie White, who added that tickets for Don Giovanni were “flying out the door”.

Mr White was particularly looking forward to next week’s version from the Dublin-based Corn Exchange company of Anton Chekhov’s The Seagull.

“The festival is always an important platform for international shows, but what’s particularly important for us is to see the work of major Irish companies like Corn Exchange.”

This year’s Festival Gala Night will honour the work of actor Sinead Cusack and celebrate her contribution to world theatre.

Other notable productions include a new adaptation of Swan Lake/Loch na hEala by Michael Keegan-Dolan at the O'Reilly Theatre; a new play by Carmel Winters, The Remains of Maisie Duggan at the Peacock stage; and Donegal, a musical play written by Frank McGuinness with music by Kevin Doherty at the Abbey stage. Druid, CoisCéim Dance Theatre and THEATREclub are among the Irish companies represented, while the programme also includes work from Australia, Belgium, Spain, Iceland, the UK, Norway, Sweden and Germany.

A number of internationally acclaimed works for children will be presented in association with the Ark. The festival runs until October 16th.