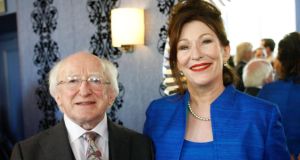 The ashes of Peter O’Toole, the larger than life Irish actor who died in December, will make a final journey to the West of Ireland this year. For now, however, they are in the safe hands of an old friend, President Michael D Higgins, in Áras an Uachtaráin.

There, too, was Omar Sharif, the Egyptian actor who played Sherif Ali of the Harith in David Lean’s 1962 film, Lawrence of Arabia, the film that has defined both men in the more than 50 years that have elapsed since.

However, the guest of honour was Mr Higgins, a friend of Mr O’Toole since 1969, who travelled from Dublin with his wife, Sabina – though his custody of the late actor’s ashes was unknown until it was revealed by O’Toole’s daughter, Kate.

“I brought my father’s ashes home to Ireland where they are currently in safe deposit with the President, who is minding them for me until I get a chance to return home to fulfil his wishes,” she said.

O’Toole, who had a house in Clifden for 30 years, will “be buried near my place in Galway overlooking the sea and the islands where his roots were. The west of Ireland was the most important place in the world to him.”

Everything about O’Toole was theatrical, larger than life; never ordinary. In death, he lay “in repose” in a north London funeral home. Next to him lay bank robber Ronnie Biggs. “He would have been tickled pink,” laughed his daughter.

Everywhere there were stories. Through the laughter, and there was much of it, there were tears, too. Albert Finney broke down, remembering that they joined the Royal Academy of Dramatic Arts in London together in 1953. Trevor Eve, too, had a catch in his throat.

Preparing for the role of TE Lawrence, her father had read Lawrence’s Seven Pillars of Wisdom, where Lawrence had written that “the dreamers of the day are dangerous men because they may act out their dreams with open eyes”.

“My father took those words to heart when he was studying for the role. But I am sure that he understood long before he read them,” said his daughter, “The world has lost a great actor, no doubt. But I am not concerned about that – I have simply lost a great dad.”

Apologising in advance to Sr Agnes Curley, a friend of O’Toole’s, film star Benedict Cumberbatch went on to tell a story about his first meeting with O’Toole, which ended with colourful expletives from the departed actor.

In his speech, Mr Higgins said he had come to honour “the life and work and Peter Seamus O’Toole”, a man of “immense charm, grace, intelligence and eloquence”, whose friendship he missed every day since his passing.

Turning to Hollywood actor Kevin Spacey, the artistic director of the Old Vic for the last decade, Mr Higgins said: “In Clifden, where Peter lived, the first thing a speaker might do is thank the parish priest for the use of the hall, so thank you”.

“We all know that time spent in Peter’s company could never be described as monotonous. He transformed the most routine or mundane experience into exciting drama,” said Mr Higgins.

O’Toole was “so self-consciously Irish”, though it “may have hurt”, Mr Higgins told the audience, when he was rejected in the early days of his career by the Abbey Theatre’s drama school “on the grounds that he could not speak Irish”.

In time, however, he performed Beckett, O’Casey and Shaw, before playing the role of Jim Larkin in RTÉ’s Strumpet City, the story of the 1913 Lockout. “In terms of his identity and his convictions it was very rewarding for Peter.”

The Old Vic was an appropriate place to bid farewell to O’Toole, the stage where he took his final curtain in the lead role of Jeffrey Bernard is Unwell – a performance that is today still spoken of in hushed tones by actors.

However, the memory will live on in the Peter O’Toole Prize, which will pay the wages of new actors in the Bristol Old Vic – the place O’Toole went to in search of a break when it was denied to him by the Abbey.

Following Mr Higgins’s election to the presidency, O’Toole – a passionate lover of rugby – had written a note of congratulations to him, “impishly suggesting that we could both get good seats at the Six Nations test matches”.

“I miss him,” said Mr Higgins. “To have had his friendship was a great gift. I imagine Peter’s soul walking the Sky Road in Clifden, on guard against the return of the rabbits [who damaged his garden]”, still coaching cricket and still shouting at the television.”

John Boyne: Why I support trans rights but reject the word ‘cis’
10