Romantic Ireland: Yeats and ‘The Irish Times’, poetry on newsprint

It’s 100 years since Yeats’s ‘September 1913’ was published in ‘The Irish Times’. Queer bedfellows they may be, but poems and papers have had a storied partnership 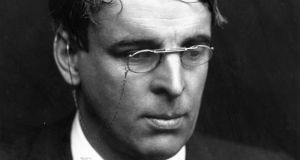 WB Yeats: The immediate occasion for his poem September 1913 was not, as is often thought, the Dublin Lockout, but Dublin Corporation’s reluctance and eventual refusal to house a collection of paintings belonging to Hugh Lane. Photograph: George C Beresford/Getty Images 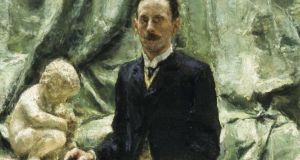 If a Dubliner happened to buy some fish and chips in early September 1913, he might have discovered on his newspaper wrapping the words “Romantic Ireland’s dead and gone / It’s with O’Leary in the grave” and wondered what item of news was being referred to. He would have found the lines belonged to WB Yeats’s poem September 1913, published 100 years ago in The Irish Times on the eighth of that month. In one of his most celebrated poems, Yeats laments the death in Ireland of heroic, romantic values and the predominance, as he saw it, of a bourgeois materialism.

The immediate occasion for the poem was not, as is often thought, the Dublin Lockout, which began in late August, but Dublin Corporation’s reluctance and eventual refusal to house a collection of paintings belonging to Sir Hugh Lane, a young, wealthy, single-minded art collector (and nephew of Lady Gregory).

Lane had offered to donate his mainly impressionist paintings to the city on condition that they be suitably housed (he himself wanted to build a gallery on a new bridge across the Liffey). Subscriptions to fund the project were implemented, meetings were held, and arguments for and against the gallery were aired. Passions ran high, with public figures weighing in on both sides.

Yeats championed Lane and the cause of art, whereas the anti-Lane party was backed by the formidable figure of William Martin Murphy, the powerful newspaper proprietor and leader of the employers against Jim Larkin and his workers during the lockout.

Yeats was incensed by his opponents’ negative attitude towards Lane’s paintings and, by extension, art in general, and September 1913 is his carefully honed riposte. In it he evokes a desiccated urban world of money-driven philistinism (“What need you, being come to sense, / But fumble in a greasy till / And add the halfpence to the pence / And prayer to shivering prayer, until / You have dried the marrow from the bone . . . ”) and contrasts it with the noble sacrifices of patriots such as John O’Leary, Fitzgerald, Emmet and Wolfe Tone. The nursery-rhyme metric of the refrain (“Romantic Ireland’s dead and gone . . . ”) has the heavy beat of a funeral bell.

Like William Blake, his spiritual mentor, Yeats believed that art and the imagination were not ancillary to life but indispensable to it, because they enlarged and enriched the minds and souls of anyone exposed to them.

For Yeats, a Dublin gallery of impressionist paintings would have been an oasis of imagination, a vital source of culture, in a city sucked dry by politics, commerce and institutional religion. And in a way, his September 1913 on a page of The Irish Times is an analogous oasis, a provider of poetic thought and imagination among stretches of newsprint.

Art asserts itself
The struggle of art to assert itself against the indifference or hostility of society is not peculiar to Yeats’s time but an age-old battle, not least during years of economic hardship.

But a century after the publication of his poem, Yeats would surely have been encouraged to see that in his country, beside traffic-laden roads and motorways, public sculptures and installations adorn hills and roundabouts; that urban workers can dive into a church to enjoy a piano or organ recital during their lunch breaks, or, indeed, into an art gallery; and, perhaps most of all, that poems are still being published in newspapers.

The marriage of poetry, “the rhythmical creation of beauty in words” (Edgar Allen Poe) and journalism, “literature in a hurry” (Matthew Arnold), has been a long and distinguished one. In England, for example, William Cowper published his jaunty ballad about John Gilpin in the Public Advertiser as far back as 1782; on October 4th, 1802, readers of the Morning Post would have had a gloomy start to their day when they read Coleridge’s Dejection: An Ode; Tennyson’s The Charge of the Light Brigade leapt out of the pages of London’s Examiner in 1854; and in the US, Walt Whitman published no fewer than 33 short, polished poems in the New York Herald from 1887 to 1888.

Yeats’s poems, of course, were no stranger to newspapers. Nor were Patrick Kavanagh’s (The Irish Times published his Spraying the Potatoes in July 1940). And British newspapers routinely publish poems of the poet laureate: for example Ted Hughes’s elegy for Princess Diana and Carol Ann Duffy’s celebration of Queen Elizabeth’s diamond jubilee.

There was also a strange poetic period in Britain in 1984-85 when the Daily Mirror hired Kingsley Amis as its poetry editor. For a year he published classic poems with a short commentary, including The Road by Yeats’s protege James Stephens; a poem, written in 1915, which also laments the urban social mores of the period.

Like all marriages, poetry and newspapers have had their strains, trial separations and divorces. After all, on the face of it, they make queer bedfellows. As WH Auden famously said, poetry makes nothing happen, whereas the best journalism attempts to do the opposite: it campaigns for change, it exposes scandals, it whistle-blows wherever it can, and if it doesn’t tell us directly what to think, it tells us what to think about.

Poetry versus journalism
Poems operate on a different level to newspaper articles. They deal not so much with facts or opinions but imagination; they seek to convey truth, suggestively and indirectly. Yeats once wrote: “We taste and feel and see the truth. We do not reason ourselves into it.”

This is arguably the biggest difference between poetry and journalism: the first feels its way into its subject matter, and embodies it, while the second lays out arguments with clarity and logic. In four verses and 210 words, September 1913 makes its point as powerfully as any 1,000-word newspaper article.

Poems cannot be substitutes for reportage, features, and opinions. We need to know that a volcano has exploded in Iceland and has brought air traffic to a halt; or that stocks are falling and house prices rising; or the health risks of sunbathing or what the issues of a referendum are. But how rewarding it is to find in some newspapers a break from the events of the world in a poetic reflection, like a calming “thought for the day” inserted into the bustle of a radio programme.

In the final analysis, roundabouts can live without sculptures, walls without murals, streets without buskers and newspapers without poems. But at what cost? All art is the incarnation of the imagination, of great spiritual invisibles, and we are enlarged by it; and all forms of art are precious but vulnerable to attitudes and economic forces.

They need everybody’s support; to lose or diminish any of them is a slippery slope. To adapt the words of the German pastor, Martin Niemöller:

First they closed some art galleries.
I said nothing, because I wasn’t keen on

Then they reduced the orchestras.
I said nothing, because I didn’t much like

Then they began to shut the libraries.
I said nothing, because I didn’t read a lot.

Then they got rid of poetry
and I didn’t have the poetry to protest.

‘September 1913’ by WB Yeats
What need you, being come to sense,
But fumble in a greasy till
And add the halfpence to the pence
And prayer to shivering prayer, until
You have dried the marrow from the bone?
For men were born to pray and save:
Romantic Ireland’s dead and gone,
It’s with O’Leary in the grave.

Yet they were of a different kind,
The names that stilled your childish play,
They have gone about the world like wind,
But little time had they to pray
For whom the hangman’s rope was spun,
And what, God help us, could they save?
Romantic Ireland’s dead and gone,
It’s with O’Leary in the grave.

Was it for this the wild geese spread
The grey wing upon every tide;
For this that all that blood was shed,
For this Edward Fitzgerald died,
And Robert Emmet and Wolfe Tone,
All that delirium of the brave?
Romantic Ireland’s dead and gone,
It’s with O’Leary in the grave.

Yet could we turn the years again,
And call those exiles as they were
In all their loneliness and pain,
You’d cry, ‘Some woman’s yellow hair
Has maddened every mother’s son’:
They weighed so lightly what they gave.
But let them be, they’re dead and gone,
They’re with O’Leary in the grave.