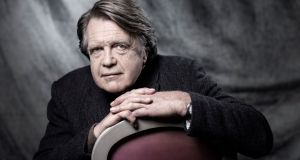 There is a moment in the new BBC documentary, Edward Carson and the Fall of Oscar Wilde, when Merlin Holland actually moans at his grandfather’s inability to resist making a joke.

Holland, who is Wilde’s only grandchild, is filmed in the British Library in London examining the transcript of Edward Carson’s cross examination of the playwright in 1895.

In court Carson is reading from some of Wilde’s billets-doux to Bosie – his young lover Alfred Douglas – settling on one line, “your slim gilt soul walks between passion and poetry” and asking, “Is that a beautiful phrase?

“Not as you read it, Mr Carson. You read it very badly,” Wilde replied.

“Well, that is not the way to treat your cross examiner in court. I think you have this feeling that Oscar is just being too clever by half,” Holland muses.

Holland also mentions how so many people believe that Carson was acting for the prosecution when, in fact, he was defending the Marquess of Queensberry against a charge of criminal libel by Wilde. The case was triggered by Queensberry leaving a card for Wilde at his club over his relationship with his son, Lord Alfred Douglas. The card read: “For Oscar Wilde, posing somdomite” [sic].

This was at the height of Wilde’s success and shortly after the premiere of The Importance of Being Earnest.

'I remember my parents saying, my mother particularly, that if anybody asks you: "Are you the grandson of Oscar Wilde?" You just say yes and conveniently change the subject'

It set the scene for one of the most famous court-room battles between two men who, evidence suggests, played together from when they were young children.

In the Old Bailey court room Carson quizzed him about an allegation that he took a young boy back to his hotel, plied him with drink that included chilled champagne and got into bed with him. Was iced champagne a favourite drink of Wilde’s?

“Yes, strongly against my doctor’s orders,” said Wilde.
“Never mind your doctor’s orders, Sir,” rebuked Carson.
“I don’t, it has all the more flavour if you discard the doctor’s order.”
“Laughter in court,” noted the court stenographer.

As the questioning continues Carson asks did a young servant dine with him?

“Certainly not,” said Wilde.
“Did you ever kiss him?”
“Oh no, never in my life. He was a peculiarly plain boy …”
Wilde went on to say, “he was, unfortunately, extremely ugly. I pitied him for it.”

Here, as he reads from the cross examination, Holland groans. “Oh God! Honestly! How he could have done that. He had one joke too many and he talked himself into prison.”

Carson moves in for the kill and thereafter the great writer begins to lose his sangfroid and wit, and loses the case as well.

And as Carson is about to open up the arguments for the defence and a string of rent boys are about to give evidence Wilde, defeated, withdraws his case against Queensberry under advice from his lawyer, Sir Edward Clarke.

Shortly thereafter the evidence amassed by Queensberry’s team is handed to the British DPP and two criminal cases are taken against Wilde for gross indecency, the first resulting in a hung jury, the second leading to his conviction, prison, bankruptcy, exile and death in Paris in 1900.

Merlin Holland is 75 now and living in Burgundy in France. Wilde’s wife Constance changed the family name to Holland after the disgrace of the trial. It is clear from the documentary made by BBC producer Damon Quinn that he has no animus against Carson. He doesn’t blame Carson for Wilde’s destruction – he blames Oscar.

Holland is son of Vyvyan Holland, one of two children of Oscar and Constance Wilde, and the only grandchild of the author.

In the 1950s Vyvyan and his wife Thelma, fearing the homophobia of the time, advised their son not to trumpet his connections to Wilde. “I can remember my parents saying, my mother particularly, that if anybody asks you: ‘Are you the grandson of Oscar Wilde? You just say yes and conveniently change the subject’.”

As explored in the documentary, Edward Carson and Oscar Wilde grew up in upper-middle-class Dublin, the Wildes in Merrion Square, the Carsons nearby in Harcourt Street.

Both born in 1854, they are said to have known each other in childhood. As part of his researches Holland unearthed a letter to The Irish Times from 1954 about Carson and Wilde playing together as five-year-olds on holiday in Dungarvan, Co Waterford in 1859. They also were in Trinity College Dublin around the same time.

Wilde characterised theirs as a strong friendship. When he learnt who was defending Queensberry he is supposed to have said about “Ned” Carson: “No doubt he will perform his task with all the added bitterness of an old friend.”

Carson demurred at this portrayal of a close relationship.

But why did Wilde take the case, and why, as Holland acknowledges, was he so arrogant and confident in court?

For a couple of reasons: first, that Wilde thought his theatrical flair and popularity gave him a degree of invulnerability; and, second, that such were the class differences at the time Wilde might have assumed that no gentleman juror would give credence to lower class street urchins alleging impropriety against him.

Wilde, too, might have underestimated Carson’s fierce forensic ability. The documentary refers to how Wilde, when he went to Magdalen College in Oxford from TCD, quickly set about losing his Irish accent.

The lawyer adopted a different strategy, as observed by historian Owen Dudley Edwards: “Carson himself had a very pronounced Dublin accent, and took a great deal of trouble to make sure that he never lost it. And do you know why? Because when they came up against him in the witness box they’d think he was a Dublin eejit and then he’d make mince meat of them.”

Which is what Carson did to Wilde.

Yet, Merlin Holland notes that ahead of the second criminal trial against Wilde that Carson is believed to have interceded on his behalf, saying to the British solicitor general: “Can you not let up on the fellow now, he has suffered a great deal?”

After the libel trial Carson also was reported to have said to his wife: “I have ruined the most brilliant man in London.” Nonetheless, Carson did not accept Wilde’s literary genius, later describing him as a “charlatan”.

Neil McKenna, author of The Secret Life of Oscar Wilde, says in the documentary that the “main theory” for the retrial going ahead was that Queensberry “blackmailed” the then British Liberal prime minister Lord Roseberry by warning that “if Oscar Wilde wasn’t sent to prison he would expose sodomy at the highest levels in British political life”. Roseberry was rumoured to have had a homosexual relationship with Queensberry’s eldest son, Francis, who died from a gunshot wound in 1900, a suspected suicide.

In the programme Holland chips in that he has “been looking for the smoking gun for years”, a letter from “Queensberry to Roseberry which says ‘nail the bastard or I’ll spill the beans’.” But he hasn’t found it.

Holland says that over the years he debated with himself whether to change the family name back to Wilde. In the end he decided against. “The fact that I have to explain to anyone why I don’t have the same name is a permanent rebuke to Victorian morality,” is his line for resolving that inner conflict.

Holland, further explaining why he has no animosity towards Carson, cites from De Profundis, Wilde’s long letter to Bosie written when he was in Reading Gaol, where the writer had the self-realisation to accept he was the author of his own downfall. “Oscar brought it on himself.”

Yet, Holland can’t help but reflect how the life of Wilde and the world of literature could have been so different had he taken a different attitude to the card Queensberry left at his club saying he was a sodomite. If somehow he could ask his grandfather just one question he knows what it would be: “Why didn’t you tear up the card and just ignore the insult?”

Edward Carson and the Fall of Oscar Wilde is broadcast on BBC 1 Northern Ireland at 10.45pm on Monday, February 1st