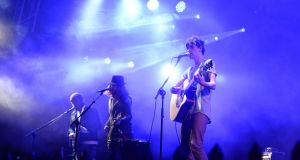 Irish band Walking on Cars have announced they have split up after “the most incredible 10 years together”.

The four-piece group from Co Kerry said on Twitter: “To all our fans, it is with sadness we say this but today we announce the end of our journey together as a band... We started off writing songs in Dingle and ended up touring all over the world creating the most special memories.”

They paid tribute to their fans saying “you listened to our music, you came to our shows and you have given us so much encouragement throughout the years.”

The indie rock group’s debut album Everything This Way peaked at number one in Ireland in 2016.

The band shared their final EP, Clouds, on social media and said each of the four members – Patrick Sheehy, Paul Flannery, Sorcha Dunham and Evan Hadnett – were working on “various projects”.