According to statement on singer’s website, a funeral service will be held in Dublin 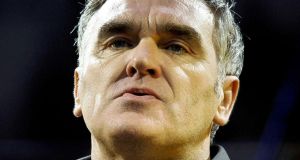 Elizabeth Anne Dwyer, the Dublin-born mother of Morrissey, the former Smiths singer, has died after an illness, according to a statement on his website.

Ms Dwyer, who is understood to have been in her 80s, lived in Altrincham, a suburb of Manchester, and worked as librarian.

In a 1985 interview with Peta, the animal-rights organisation, he said: “I became a vegetarian when I was about 11 or 12 years old. My mother was a staunch vegetarian as long as I can remember. I would definitely say that my mother started me. She’s very active. She often goes on anti-hunt rallies in the UK. She has influenced me very much.”

According to a short statement on the singer’s website, a funeral service will be held in Dublin, “where Elizabeth was born”; Morrissey added that “all are welcome”. No details have yet been released of the funeral service.

Morrissey had posted on his website on August 8th asking that his fans “offer prayers of hope and prayers of intercession for the recovery of Elizabeth Anne Dwyer, who is my mother, who is in trouble”. He added: “She is me, and without her... there is no tomorrow.”